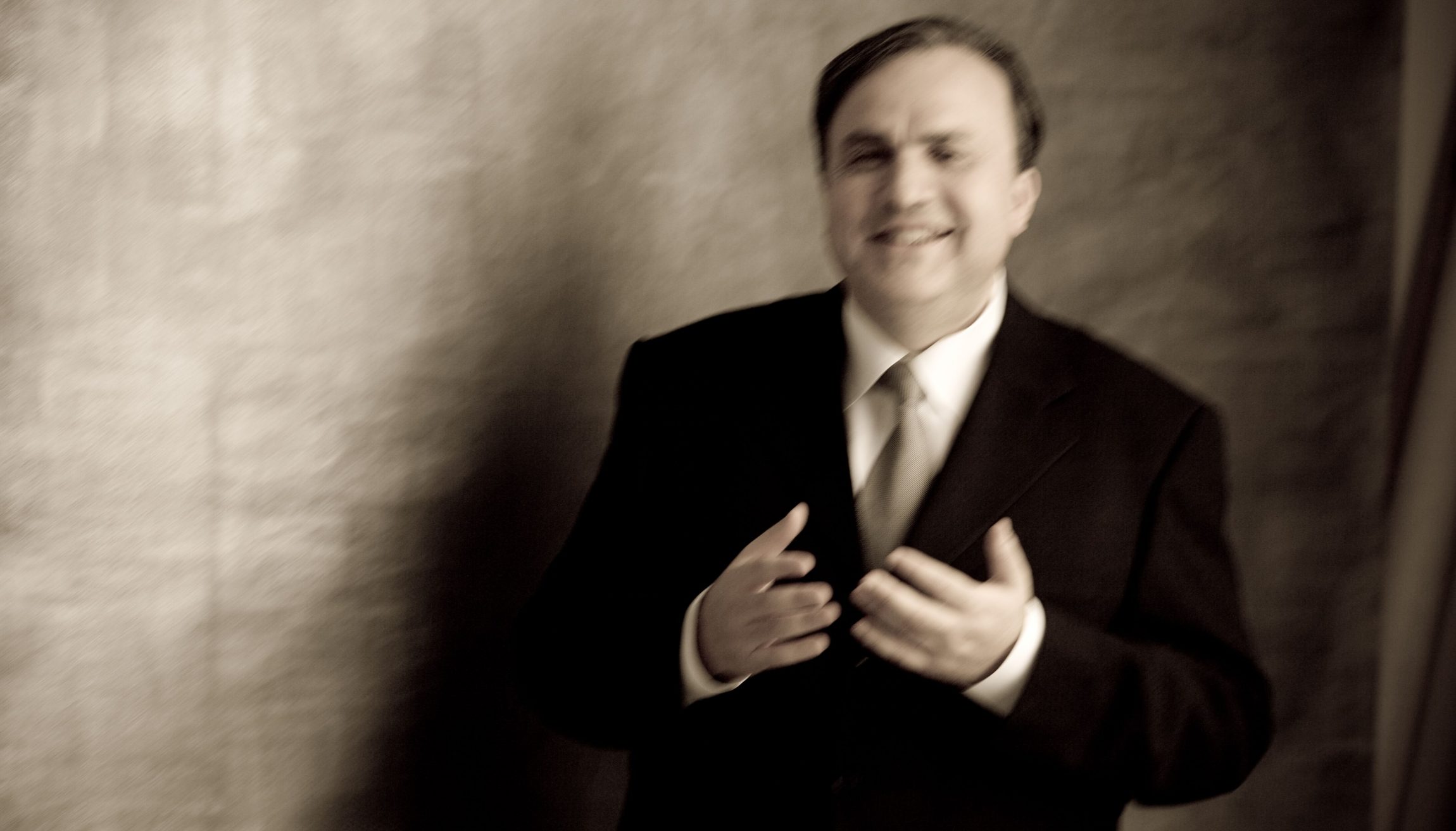 Internationally recognized as one of today’s most acclaimed and admired pianists, Yefim Bronfman stands among a handful of artists regularly sought by festivals, orchestras, conductors and recital series. His commanding technique, power and exceptional lyrical gifts are consistently acknowledged by the press and audiences alike. He has been nominated for 6 GRAMMY® Awards, winning in 1997.

32 Variations on an Original Theme in C Minor

Beethoven’s 32 Variations in C Minor, composed in 1806–07, are perhaps less renowned than their grander successor, the 33 Variations on a Waltz by Diabelli, composed much later in his life. The earlier set is, for one, considerably more compact: the theme lasts a mere eight bars, meaning that some variations are able to fit comfortably on just one line of music; Beethoven therefore arranged some of them into subgroups of 2-4 variations. Even so, thanks to the brevity of the theme, Beethoven produces a fast-paced cavalcade of kaleidoscopic variety as the variations pass by.

Beethoven long had a flair for variations sets – in fact, his earliest documented childhood composition were his Nine Variations on a march by Ernst Dressler, composed when he was twelve. Throughout his life, Beethoven wove variations into larger-form works, as in the second movement of his Violin Sonata No. 9 (the “Kreutzer”), or in the Finale of his Piano Sonata, Op. 109. However, he also composed a large number of standalone variations sets; although most of them are less well remembered today, Beethoven drew upon a colorful range of themes which offer insights into the types of music circulating in Vienna during his lifetime. Such themes included popular operatic hits (such as his early variations on Mozart’s “Bei Männern”, Righini’s “Venni Amore,” or Salieri’s “La stessa, la stessissima”), alongside themes with a particular national flavor (such as his variations on a Swiss air, a Russian dance, a Turkish march, or “Rule Britannia” and “God Save the King).

The 32 Variationson an Original Themetakes as its departure not so much a melodic theme as these above examples, but rather a thoroughbass part– the bassline and corresponding harmonic progression. In this aspect, it more closely resembles the form of a “chaconne,” a genre of variations most popular in the 17th and 18th Centuries, and exemplified by Bach’s Goldberg Variations.

The thirty-two sonatas of Beethoven constitute one of the most revered musical corpuses in the piano repertoire. Spanning the twenty-seven years from Beethoven’s mid twenties through the decade of his death, the sonatas (rather like the cycle of string quartets) track Beethoven’s continual and restless search for expanded musical means of expression. Beyond the earliest sonatas, in which he puts his own stamp on the form as inherited from Haydn’s generation, Beethoven began placing an ever-greater emphasis on techniques of thematic transformation, magnifying the “development” section of sonata form – which began as a comparatively brief transitional phase connecting the introduction of themes to their reprise – into the main event. His latest sonatas push the principle of development to the extreme, even as his forms grow more concise: fragmentary themes are introduced, as though embryonic, their development underway before one even has a chance to apprehend them.

Sonatas Nos. 6 and 7 come from the relatively early Op. 10, a set of three sonatas published in 1798 and dedicated to Countess Anne Margarete von Browne, the wife of an important early patron. While a historian might urge caution in interpreting Beethoven’s early sonatas in light of his later ones, it is difficult to resist identifying qualities in these works which set the stage for Beethoven’s future experimentation in the genre. Sonata No. 6 builds its opening theme from short motivic gestures, demonstrating, in Lewis Lockwood’s words, Beethoven’s ability to “make much from little”. And in No. 7, extending a technique he adopted even in his earliest piano sonatas, Beethoven adds a fourth movement (a lyrical minuet) to the standard three-movement sonata form as composed by Haydn and Mozart, thereby projecting the grander, quasi-symphonic prospects Beethoven envisioned for them.

If the Op. 10 Sonatas foreshadow the Beethoven to come, the Sonata “Appassionata” (the publisher’s designation, not Beethoven’s), may be the most emblematic realisation of the composer’s mature, “heroic” style in the sonata genre. It was conceived amid Beethoven’s extensive efforts to complete his opera Leonore(which later became Fidelio), and shortly after he composed his “Waldstein” Sonata, the other magisterial sonata of the “Middle Period”. This puts it at a similar time period to the set of 32 Variationswith which the concert opened.

Together, these Middle Period sonatas are characterised not only by an expressive scope unparalleled within the piano sonata repertoire, but also by their technical demands – on the part of the pianist, who requires a prowess exceeding the capacities of even a distinguished amateur – and even on the part of the instrument, as Beethoven pressed up against the limits of piano technology. This fact signals an important philosophical shift: no longer did Beethoven compose keyboard sonatas in view of relaxed and convivial consumption in the domestic sphere; rather, he conceived of the piano as a medium capable of sustaining musical works of immense range, worthy of the public stage. However, with these lofty ambitions, Beethoven projected a vision for concert life that did not (yet) correspond to the realities: there appears to have been only one occasion when one of Beethoven’s piano sonatas (Op. 90) performed publicly during the composer’s lifetime.