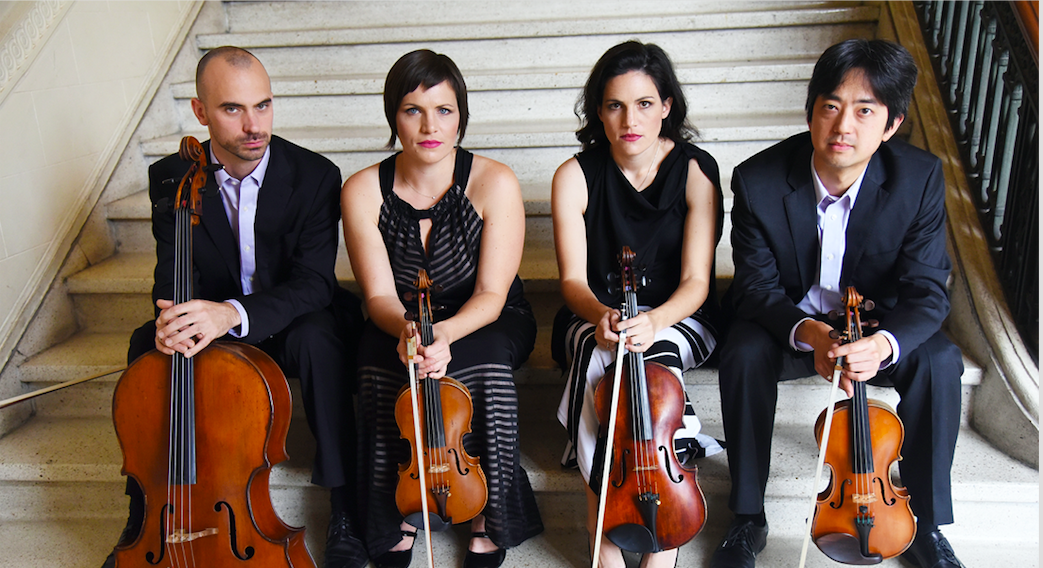 The Jupiter String Quartet returns to present a program spanning a century and a half and spread across Europe – opening with another exquisite work by precocious young Mendelssohn, and concluding with Dvořák’s late quartet, composed just after returning to Europe from his years in America. In the middle, it’s a concise and motivically dense work from Shostakovich, one of the twentieth-century titans of the string quartet genre.

In 1827, Beethoven’s late string quartets were published, and Mendelssohn, 18 years old, was studying the complex scores voraciously. Although the late quartets of Beethoven were received in most musical circles with skepticism or perplexity, Mendelssohn was keenly moved by them, touched in particular by the distillation of form Beethoven achieved in those final works. He described what he admired most, in a letter to the Swedish composer Adolf Lindblad, as “the relationship of all 4 or 3 or 2 or 1 movements of a sonata to each other and their respective parts, so that from the bare beginning…one already knows the mystery that must be in the music.”

That year, Mendelssohn decided to compose his own string quartet, his first significant endeavor in the genre. (The numeration of this Quartet is misleading; his String Quartet No. 1, Op. 12, was in fact composed two years after this one). Boldly seeking to abide by the qualities he most admired in Beethoven’s works, Mendelssohn began his quartet with a quotation from his own short, romantic song titled, “Frage” (“Question”). In this way, Mendelssohn’s quartet recalls not only Beethoven, but also Schubert, who famously reworked songs into chamber music, as in the “Death and the Maiden” Quartet and the “Trout” Quintet. The melodic and rhythmic figure underpinning the question, “Ist es wahr?” (“Is it true?”) proliferates throughout Mendelssohn’s quartet, and the full quotation returns – tenderly reharmonized – as the quartet’s conclusion. As Mendelssohn wrote, with pride, to Lindblad: “You will hear its notes resound in the first and last movements, and sense its feeling in all four”.

The full text of “Frage”, which was published under the pseudonym “H. Voss”, might have been written by Mendelssohn himself:

That you are still there in the arbour,

by the grape vines, waiting for me?

And cry to the moonlight and the starlight

for news of me?

Is it true? Speak!

What I feel none can know but she

and who, true to me forever,

true to me forever, forever will remain.

Key to any composer’s success are the performers who help shape the music, both throughout the compositional process, and then on the stage. Shostakovich’s achievements as one of the most sensitive string quartet composers of the twentieth century owe much to the close collaboration he shared for nearly four decades with the musicians of the Beethoven Quartet. Formed in 1923 as the “Moscow Conservatory Quartet”, the ensemble comprised four graduates of that institution; they became the “Beethoven Quartet” a few years later, on the heals of their complete Beethoven cycle commemorating the centenary of the composer’s death.

Shostakovich became acquainted with the Beethoven Quartet in 1939. He had just completed his first string quartet; following its premiere by the Glazunov Quartet in Leningrad, Shostakovich brought it to Moscow, where the Beethoven Quartet gave its Moscow premiere, paving the way for a lasting and fruitful relationship. The following year, Shostakovich composed his Piano Quintet which he played together with his new colleagues; and over the coming decades, he composed fourteen further string quartets, of which all but the last were premiered by the ensemble, even as the personnel underwent changes over their fifty-year span.

One such personnel change came when the second violinist, Vasily Shirinsky, died unexpectedly in 1965. Shostakovich was as deeply moved by Shirinsky’s death as were the fellow members of the Quartet; yet while the ensemble contemplated the possibility of disbanding, Shostakovich encouraged them to forge on. He embarked on a sequence of four string quartets, each one dedicated to an individual member of the group, starting with the late Shrinisky, who is memorialised in this String Quartet No. 11 – particularly in its sixth movement, a grief-stricken and unsparing Elegy.

Dvořák’s most famous string quartet is the one he composed in Spillville, Iowa – his twelfth, nicknamed “the American”. Dvořák composed that quartet in 1893 while on summer holiday from the National Conservatory in New York City, where he had taken up the directorship a year prior. However, despite his success in America and the richness he found in American music, by the following year Dvořák began to feel pangs of homesickness, which was exacerbated by a trip home during the summer of 1894. Between teaching responsibilities and administrative anxieties, he could not devote as much time to composition as he would have wished. “It would be best to be back in Vysoká,” he wrote, referring to his country property in Bohemia. “I am refreshed there, I rest, I am happy. Oh, if only I were home again!” With the end of the 1895 academic year, he set off back to Europe, and in August he informed the President of the Conservatory, Jeannette Thurber, that he would not be returning in the autumn.

Once back in Bohemia, Dvořák first seized the opportunity to rest – “I’m just lazing around and haven’t touched my pen”, he wrote to a friend. After four relaxing months, he returned to some unfinished business. He wrapped up one string quartet which he had begun in the States (which would become his “fourteenth”); and began yet another, which became this, his “thirteenth” quartet, and which he described on the manuscript score as “my first composition after my second return from America”. In this quartet, in particular, he sets out in new stylistic directions. In place of the lyricism of melodies which readily spin forth from his previous quartets, the opening theme is a string of short motivic gestures. These gestures become separate and develop independently throughout the movement – and will even make reappearances in the Finale.