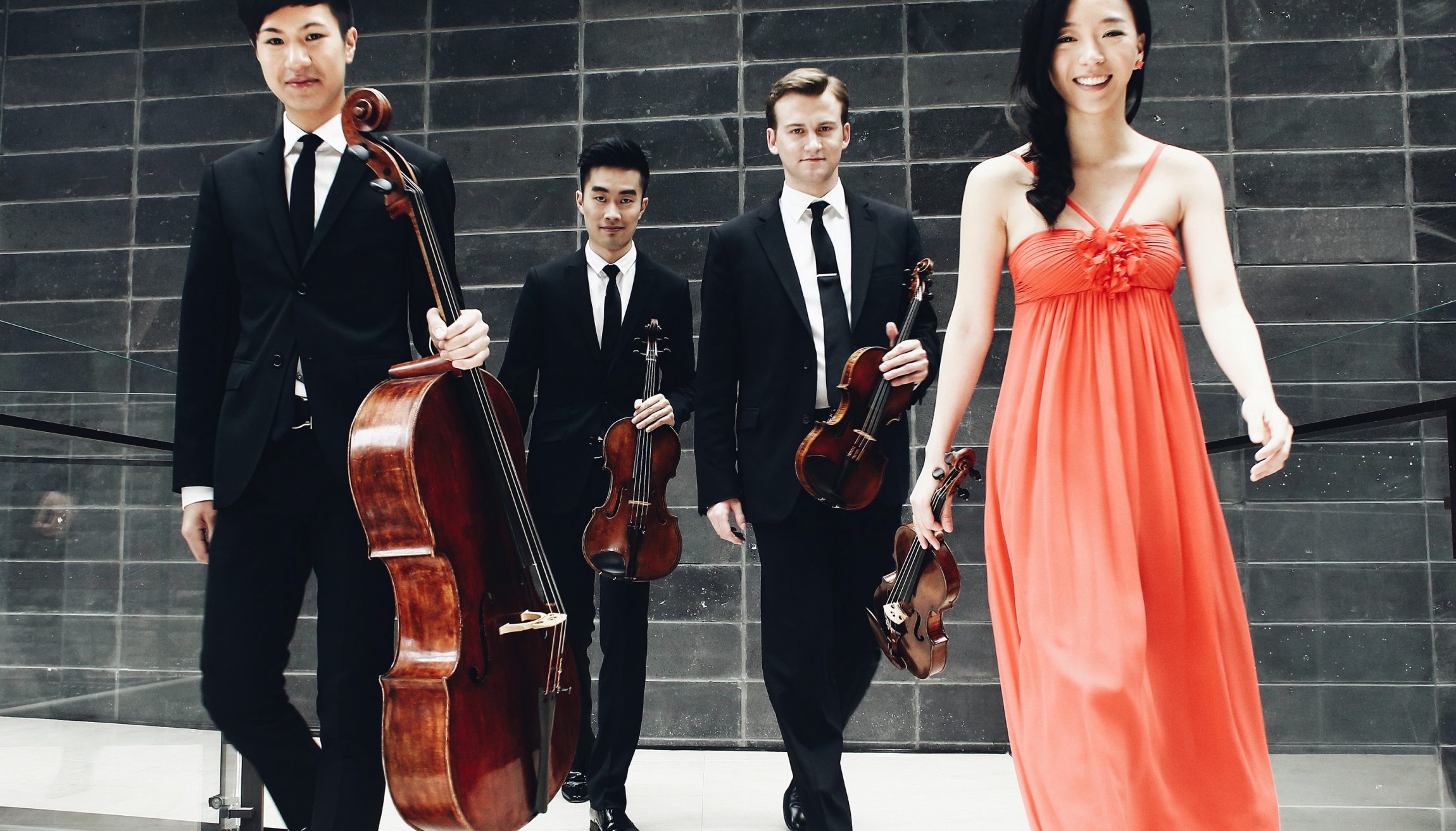 Rising stars in chamber music, the Rolston String Quartet won first prize at the 2016 Banff International Competition and will arrive at the Festival fresh off their first European tour. Formed in Canada in 2013, they bring the work of their compatriot composer R. Murray Schafer, whose research into natural soundscapes and the rhythmic patterns of waves inspired his String Quartet No. 2. In the second half they will be joined by internationally-renowned violist Dimitri Murrath for a transitional quintet in which Beethoven offers glimpses of his later style.

Schumann habitually concentrated on a single genre or form for a substantial period of time. Before 1840, his compositional output consisted of pieces for solo piano, with few exceptions. Then, during the tumultuous year leading up to his marriage to Clara Wieck, he was drawn to lieder (song), composing over a hundred in a short span; the following year he wrote two symphonies and an orchestral overture. And in 1842, Schumann dedicated himself to chamber music, composing the three string quartets, Op. 41, as well as the famous Piano Quintet, Op. 44 and Piano Quartet, Op. 47 (which will be performed at the festival on July 26).

The impulse to compose string quartets came while Clara was away on a concert tour, leaving Robert with some time alone in Leipzig. He spent his time imbibing scores of the masterful quartets of Haydn, Mozart, and Beethoven, before feverishly composing all three of his own quartets in less than three weeks in June. They were premiered in September of that year as a present for Clara’s twenty-third birthday.

Schumann dedicated the complete set to Felix Mendelssohn, who had served at the helm of the Leipzig Gewundhaus since 1835. Schumann and Mendelssohn shared a mutually enriching relationship as inhabitants of the same city. As professional colleagues, they are known to have crossed paths nearly every day. Only a year apart in age, they admired each other’s work, despite voicing occasional critiques; Mendelssohn supported Schumann by performing his symphonies with his orchestra, and Clara was one of the most frequent performers of Mendelssohn’s piano music. Beyond professional camaraderie, the two composers were intimate friends, and the quartets’ dedication was far from Schumann’s greatest tribute to Mendelssohn: in 1841, Schumann had asked Mendelssohn to be the godfather of his first daughter, Marie, and in 1854, he would name his youngest son Felix.

Canadian composer R. Murray Schafer is particularly known as founder of acoustic ecology, an academic field often known as “soundscape studies”. In 1969, Schafer established the World Soundscape Project at Simon Fraser University, initially as a reaction to increases in noise pollution in Vancouver. The ongoing project documents diverse sonic environments over time, and advocates for humans to live in sonic balance with their environment via the cultivation of “soundscape design” instead of excessive noise.

Schafer has published the following note to accompany String Quartet No. 2 “Waves”:

“In the course of the World Soundscape Project, we recorded and analysed ocean waves on both the Atlantic and Pacific coasts of Canada. The recurrent pattern of waves is always asymmetrical but we have noted that the duration from crest to crest is frequently between 6 and 11 seconds. Fewer ocean waves are of longer or shorter duration than this. It is this wave motion that gives the quartet its rhythm and structure. The listener will readily hear the dynamic undulations of waves in this piece, and as the piece develops several types of wave motion are combined. Aside from this, I have sought to give the quartet a liquid quality in which everything is constantly dissolving and flowing into everything else. That is to say, the material of the work is not fixed, but is perpetually changing, and even though certain melodic units are used repeatedly, they undergo continual dynamic, rhythmic and tempo variation. Although the work has waves as its theme (or rather its form) no program is intended.”

Beethoven’s only string quintet sits between what have become known as his early and middle periods, composed the same year as his Piano Concerto No. 3 and the “Moonlight” Sonata.  Beethoven was 30 years old, and was just beginning to resign himself to the agonizing reality of his depreciating hearing.

The transitional nature of the Quintet is evident over the course of the piece. The first movement is polished and temperate. The development section of its sonata-form structure – the section which Beethoven would expand into the dramatic center of gravity of his later compositions, thus deforming the Classical sonata – is all but restrained here. By the Scherzo, however, we can witness elements foreshadowing Beethoven’s more obsessive tendencies, as he weaves a movement from a fragmentary motif; and the turbulent Finale has given rise to the work’s occasional nickname, “The Storm.”

The string quintet instrumentation demonstrates the influence of Mozart, who had popularized supplementing the string quartet ensemble with an additional viola. This was not yet a conventional practice; for comparison, Haydn, who wrote sixty-eight string quartets, never composed a string quintet, and Boccherini, who had published several string quintets, favored doubling the cello rather than the viola. Beethoven therefore did not have many models on which to base his own work, and was certainly inspired by Mozart’s pair of string quintets, K. 515/516, which were published in 1787 (the same year Beethoven visited Vienna and is said to have met Mozart), and are often considered Mozart’s finest chamber music.