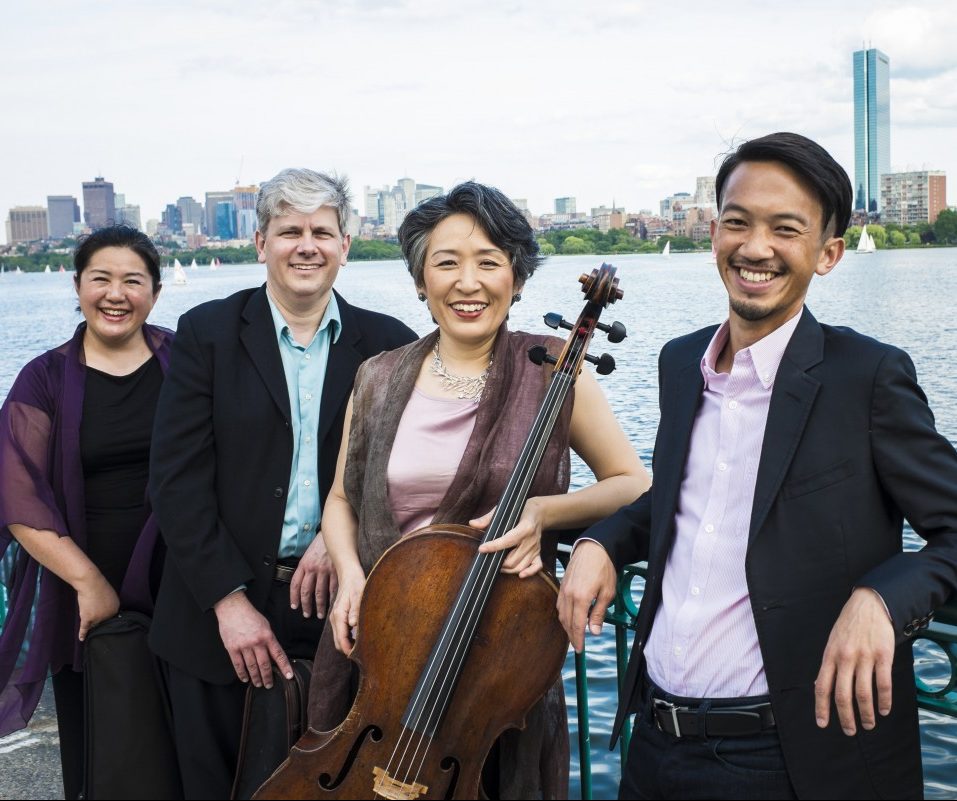 Now in their twenty-fifth year as an ensemble, the Borromeo String Quartet continues to set the standard for quartet performance and innovation. Their exciting program opens with Mendelssohn’s String Quartet, Op. 13, a tightly constructed and exquisitely heartfelt work which belies the composer’s young age (18) at its time of composition. Ligeti’s first String Quartet, subtitled Métamorphoses Nocturnes, demonstrates its indebtedness to Bartók, and reflects the composer’s early style before he fled Hungary in 1956. For Schumann’s rousing Piano Quintet, the Quartet are joined by Pei-Shan Lee, who will play the same part composed for Clara Schumann but performed by Felix Mendelssohn at the work’s premiere in 1842.

In 1827, Beethoven’s late string quartets were published, and Mendelssohn, 18 years old, was studying the complex scores voraciously. Although the late quartets of Beethoven were received in most musical circles with skepticism or perplexity, Mendelssohn was keenly moved by them, touched in particular by the distillation of form Beethoven achieved in those final works. He described what he admired most, in a letter to the Swedish composer Adolf Lindblad, as “the relationship of all 4 or 3 or 2 or 1 movements of a sonata to each other and their respective parts, so that from the bare beginning…one already knows the mystery that must be in the music.”

That year, Mendelssohn decided to compose his own string quartet, his first significant endeavor in the genre. (The numeration of this Quartet is misleading; his String Quartet No. 1, Op. 12, was in fact composed two years after this one). Boldly seeking to abide by the qualities he most admired in Beethoven’s works, Mendelssohn began his quartet with a quotation from his own short, romantic song titled, “Frage” (“Question”). In this way, Mendelssohn’s quartet recalls not only Beethoven, but also Schubert, who famously reworked songs into chamber music, as in the “Death and the Maiden” Quartet and the “Trout” Quintet. The melodic and rhythmic figure underpinning the question, “Ist es wahr?” (“Is it true?”) proliferates throughout Mendelssohn’s quartet, and the full quotation returns – tenderly reharmonized – as the quartet’s conclusion. As Mendelssohn wrote, with pride, to Lindblad: “You will hear its notes resound in the first and last movements, and sense its feeling in all four”.

The full text of “Frage”, which was published under the pseudonym “H. Voss”, might have been written by Mendelssohn himself:

Is it true? Is it true?
That you are still there in the arbour,
by the grape vines, waiting for me?
And cry to the moonlight and the starlight
for news of me?

Ligeti’s early life was tumultuous and tragic. Born in Transylvania to a Hungarian Jewish family, Ligeti spent his childhood in Cluj, which is today in Romania, where he received musical training at the conservatory. In 1944, he and his family were uprooted, with Ligeti and his brother being sent to labor camps, and his parents sent to Auschwitz. His father and brother did not survive. After the war, Ligeti managed to resume music studies at the Liszt Ferenc Academy in Budapest. He would go on to teach there from 1950 until the unsuccessful Hungarian Revolution in 1956, after which he managed to flee to Vienna.

Ligeti’s String Quartet No. 1 was composed during his time as a professor in Budapest. Later in life he would refer to his works from this period as “prehistoric Ligeti,” alluding with some detachment to the isolation from worldly cultural exposure he experienced under the repressive Hungarian regime. During this period, the works of Bartók were a particularly strong source of inspiration, which Ligeti affirms in his own commentary on the Quartet:

“The first word of the sub-title refers to the form. It is a kind of variation form, only there is no specific ‘theme’ that is then varied. It is, rather, that one and the same musical concept appears in constantly new forms – that is why ‘metamorphoses’ is more appropriate than ‘variations’. The quartet can be considered as having just one movement or also as a sequence of many short movements that melt into one another without pause or which abruptly cut one another off. The basic concept, which is always present in the intervals but which is in a state of constant transformation, consists of two major seconds that succeed each other transposed by a semitone. In this First String Quartet there are certainly some characteristics of my later music, but the writing is totally different, ‘old-fashioned’; there are still distinct melodic, rhythmic and harmonic patterns and bar structure. It is not tonal music, but it is not radically atonal, either. The piece still belongs firmly to the Bartók tradition (remember my situation as a composer in Hungary at the beginning of the fifties), yet despite the Bartók-like tone (especially in the rhythm) and despite some touches of Stravinsky and Alban Berg, I trust that the First String Quartet is still personal work.”

Robert Schumann’s Piano Quintet was composed during his year of chamber music – a period of inspiration which had taken root while Clara was on an extended concert tour across Europe, leaving Robert alone in Leipzig. The year had begun with Robert’s set of three String Quartets, composed following a period of extended study of the Haydn, Mozart, and Beethoven Quartets, and also included his Piano Quartet, performed on July 26. To an extent, the Quartet and Quintet are companion compositions, written at nearly the same time, and sharing a common key signature.

With his Piano Quintet, Schumann gave rise to a new genre: perhaps inspired in part by his recent study and composition of string quartets, Schumann combined the string quartet with the piano, substituting a second violin in for the double bass of the Classical piano quintet instrumentation (as in Schubert’s “Trout” Quintet or Louise Farrenc’s Piano Quintets. The result was a versatile ensemble that sat somewhere between the traditionally private intimacy of chamber music and public dynamism of the symphony; the five musicians could alternatively maintain independent and contrapuntal musical lines, or the string quartet could act as a unit alongside (or against) the piano.

Naturally, Schumann dedicated the Quintet to his wife Clara, although due to illness it was Felix Mendelssohn who played the piano part, apparently on sight, at its premiere in December. Clara would later champion the work throughout her career, and she also became an advocate for the new genre, encouraging Brahms to rearrange his planned Sonata for Two Pianos into his Piano Quintet in F Minor, Op. 34.