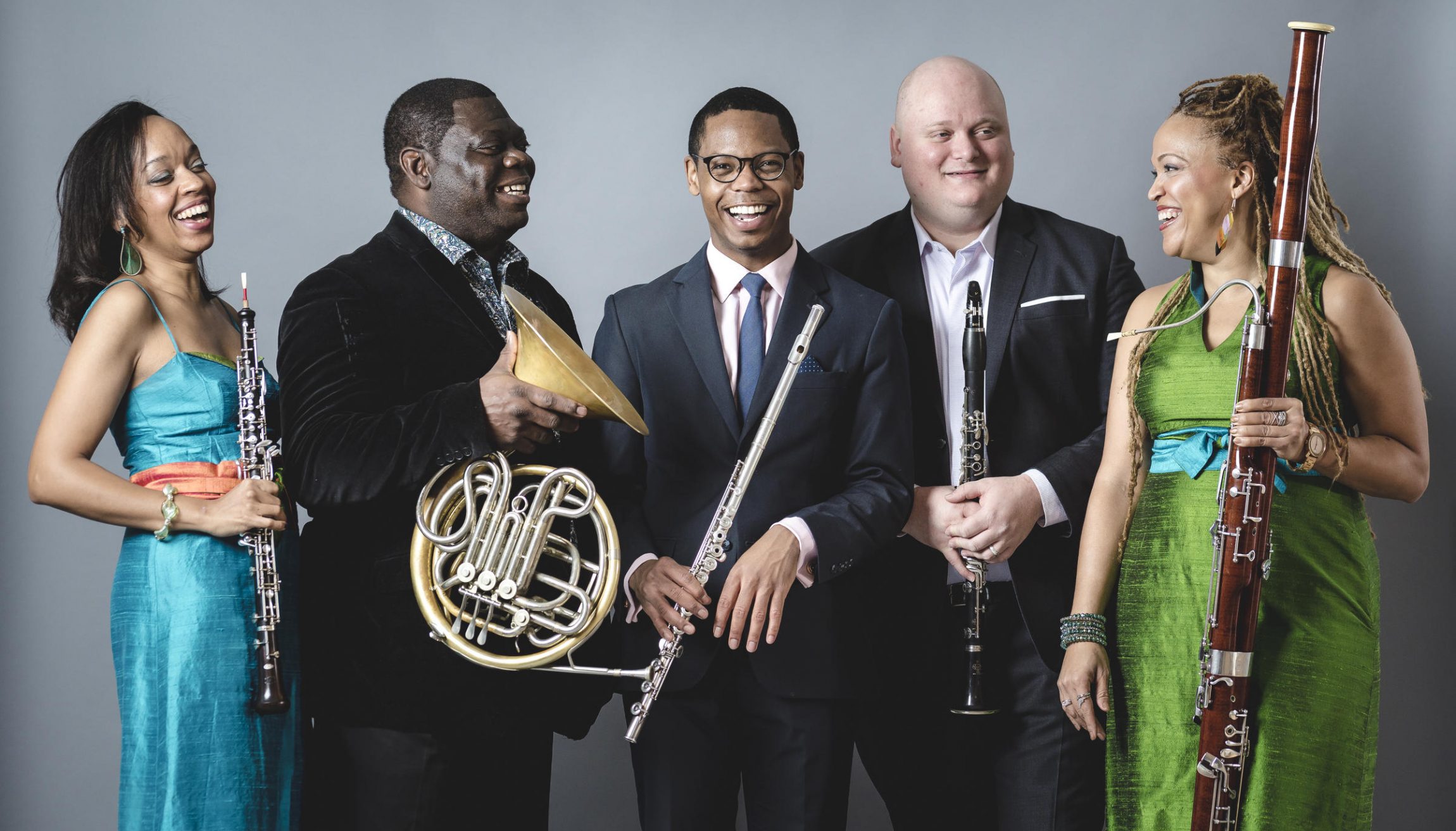 The Festival is thrilled to welcome Imani Winds for this wide-ranging program of American composers with roots in Argentina, Cuba, and New York City. Formed in 1997, Imani Winds have built an international reputation on a “concept of connectivity,” engaging with the public through innovative and relevant programming and commitment to inspiring through outreach.

Startin Sumthinis a modern take on the genre of Ragtime music.  With an emphasis on ragged! The defining characteristic of Ragtime music is a specific type of syncopation in which melodic accents occur between metrical beats. This results in a melody that seems to be avoiding some metrical beats of the accompaniment by emphasizing notes that either anticipate or follow the beat. The ultimate (and intended) effect on the listener is actually to accentuate the beat, thereby inducing the listener to move to the music. Scott Joplin, the composer/pianist known as the “King of Ragtime”, called the effect “weird and intoxicating.”

John Harbison studied with Walter Piston at Harvard, with Boris Blacher in Berlin, and with Roger Sessions and Earl Kim at Princeton; in 1969 he joined the faculty at MIT.  His compositions include two operas (one on Shakespeare’s Winter’s Tale), orchestral works, concertos for piano and for violin and for brass quintet, chamber music, and vocal settings on an impressive range of texts. Harbison has also made a career as a conductor; he has been conductor of the Boston Cantata Singers and has guest-conducted the San Francisco and Boston Symphony Orchestras.  He has been composer-in-residence at Reed College, with the Pittsburgh Symphony Orchestra, and with the Los Angeles Philharmonic.

Harbison composed his Quintet for Windsin the summer of 1978. Himself a pianist and string player, Harbison has written on several occasions of his pleasure in composing for winds and in working with wind players, and the Quintet for Windsmay be seen as a celebration of that pleasure. In a prefatory note in the score Harbison suggests a key to this music when he says that it “emphasizes mixtures and doublings.” Individual parts are notated and phrased with unusual precision, and the quintet offers varied textures and contrasts between different combinations of instruments-there are frequently several layers of sound and several musical events happening simultaneously.

The opening of the Intrada demonstrates this: horn and bassoon in unison have the quiet opening idea: above them oboe and clarinet play quiet sustained notes and superimposed on top of them is the flute’s trill on those same notes. Within seconds, however, all five instruments share a fortissimounison, and such contrasts of dynamics and texture will mark the entire movement. The Intermezzo (marked lusingando “intimate”) shifts meters constantly over its first half, with the slightly unbalanced 5/8 seeming to predominate before the movement settles comfortably into 3/4. The Romanza, also full of shifting tempos, gives way to a Scherzoin ABA form; here blistering runs by solo instruments are set off by sharp staccato attacks from the other instruments. A faint air of parody hangs over the high-spirited Finale. After a slow introduction, the movement erupts with jaunty themes, syncopated rhythms, and unusual markings: ruvido (“coarse”), amoroso (“loving”), and troppo dolce (esagerato). At the end, the music begins to press ahead and rushes to an energetic close.

The son of a professional violinist, Lalo Schifrin studied piano as a boy and graduated from the University of Buenos Aires. He then went to Paris, where he studied with Charles Koechlin, attended Messiaen’s lectures, and played jazz piano in clubs at night. From Paris he went to New York, where he performed with Dizzie Gillespie for several years before moving to Hollywood in 1963. Over the last forty years Schifrin has composed in a number of genres, though he may be most familiar to general audiences for his film scores: he wrote the music for the television shows The Man from UNCLE and Mission Impossible, and he also wrote the score for the film Bullitt.

Schifrin wrote La Nouvelle Orleans, for woodwind quintet, in 1987.  The music evokes its title, specifically by way of a traditional New Orleans funeral, followed by music one would hear in a “2ndline”. The piece is quite clearly a reflection of Schifrin’s background as a jazz musician, yet contemporary composer. The uneven rhythmic gait of the beginning leads to long solos for all the instruments. The music gathers more energy, and the final section turns into a jazzy romp. Beginning slowly, this gradually accelerates into music of real verve, making the big band conclusion all the more effective.

Composer, clarinetist, and saxophonist Paquito D’Rivera, one of the most celebrated jazz and Latin musicians of his generation, has also built a reputation as a classical performer and composer since appearing as soloist with the National Symphony Orchestra in the premier of Roger Kellaway’s David Street Bluesin 1988. His original compositions blend the influences of Cuban, African, American, jazz, popular, and classical idioms. D’Rivera has been artist-in-residence at the New Jersey Performing Arts Center and artistic director for jazz programming of the New Jersey Chamber Music Society, and serves on the boards of Chamber Music International, Chamber Music America, and the New York Virtuosi Orchestra. He is also artistic director of the Festival Internacional de Jazz en el Tambo in Punta del Este, Uruguay. D’Rivera has authored an autobiography (My Sax Life) and a novel (En Tus Brazos Morenos).

Imani Winds has provided the following information about d’Rivera’s Kites Over Havana:

Kites over Havana was inspired by the following anonymous poem, which is spoken throughout the piece:

I would like to be a kite, and with my tail of red and white I’d love to fly so high, the things below would disappear from sight.

When once you have tested flight, you will forever walk the earth with your eyes turned skyward, for there you have been, and there you will always long to return.

The poem is analogous to the concept of freedom. When truly free, one can soar like a kite and once that feeling is experienced, there is no turning back. However, even in freedom there are precincts, and although the kite has the freedom of flight, the string keeps in bound to the earth.

Mr. D’Rivera was motivated to write Kitesfor Imani Winds because he felt the ensemble exemplifies this notion of freedom that is manifested through music and culture.

Dance Mediterraneais one of Shaheen’s classic compositions. The essence of traditional Middle Eastern sounds met with virtuosic compositional technique is more than apparent in this multi-dimensional, multi-metered piece. It mixes improvisation with block ensemble writing concluding with a fiery finish. This arrangement stems from the collaboration Imani Winds has established with master oud player, Simon Shaheen.