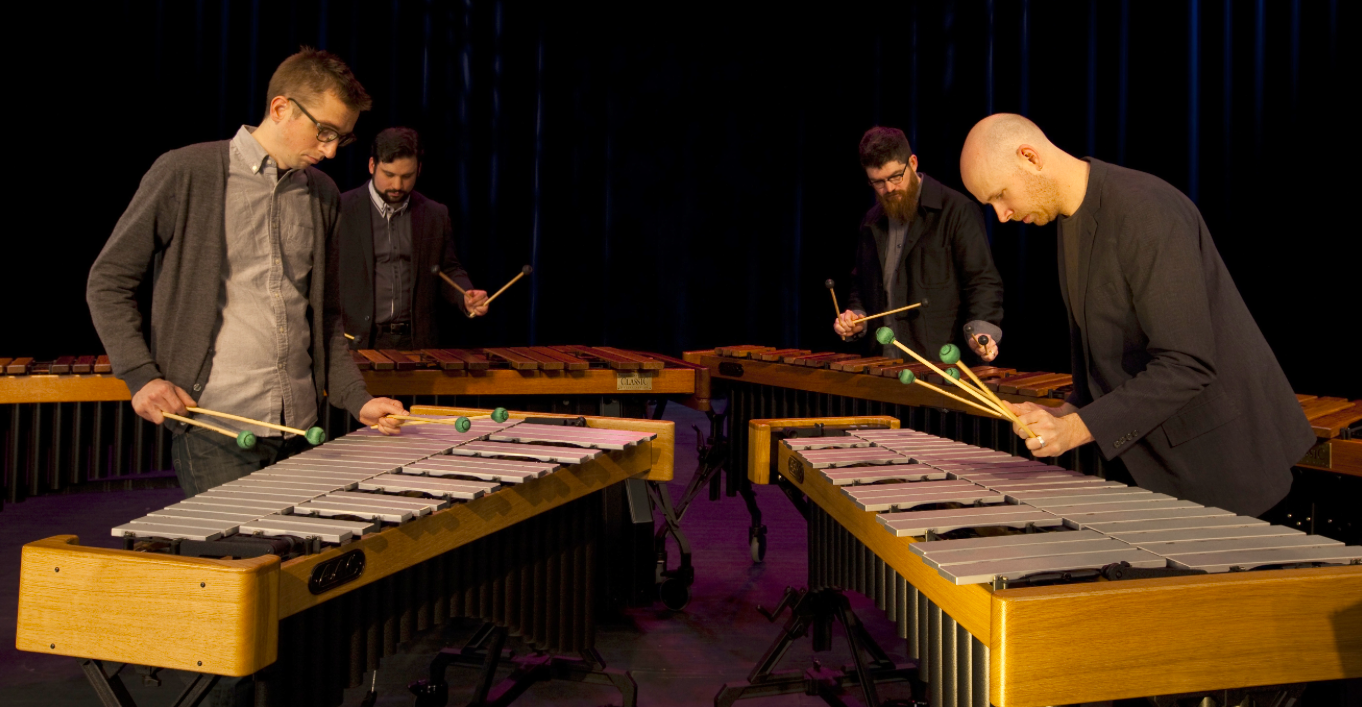 With innovative multi-genre original productions, sensational interpretations of modern classics, and an “exhilarating blend of precision and anarchy, rigor and bedlam” (The New Yorker), Sō Percussion has redefined the scope and vital role of the modern percussion ensemble. Sō’s repertoire ranges from “classics” of the 20th century, to commissioning and advocating works by contemporary composers, to distinctively modern collaborations with artists who work outside the classical concert hall. Sō Percussion also composes and performs their own works, ranging from standard concert pieces to immersive multi-genre programs. In these concert-length programs, Sō Percussion employs a distinctively 21st century synthesis of original music, artistic collaboration, theatrical production values and visual art, into a powerful exploration of their own unique and personal creative experiences.

At the piano, I listen for how the contortions of the hand can suggest the surges of a body in motion. In my trio music, I’m often evolving rhythmic shapes, shaping gestural patterns with an embodied resonance, and striving to evoke specific qualities of movement with our performed rhythms. Someone once compared us to the Flying Karamazov Brothers, with their coordinated, cyclical, antiphonal actions. I see the work of the rhythm section as a ritual of collective synchrony, aiming above all to generate a dance impulse for everybody in the room.

Torque, a twisting force on a body, seems to appear for the listener at music’s formal boundaries, when one movement type gives way to another. This piece for Sō Percussion invites them to perform transformations that twist the music’s temporal flow, bringing the micro-relational art of the rhythm section to this virtuosic quartet. – Vijay Iyer

Why “Taxidermy”? I just find the word strangely compelling, and it evokes something grand, awkward, epic, silent, funny, and just a bit creepy — all characteristics of this piece, in a way. The repeated phrase toward the end (“the detail of the pattern is movement”) is a little concept I love trying (and failing) to imagine. It comes from T.S. Eliot’s beautiful and perplexing Burnt Norton (from the Four Quartets), and I’ve used it before in other work — as a kind of whimsical existentialist mantra. – Caroline Shaw

With Broken Unison, I took the opportunity – joyfully I might add – to re-engage with questions of abstract compositional technique after a period writing more semantically charged music for operas and kind-of-operas. The work is full to the hilt with various ways of disrupting unisons, from antiphonal interchanges through staggered chorales to a fairly dizzying use of canons of various hues, from the airily spaced to the breathily close, so close that they veer towards a kind of fractured unison at times. I became even more ambitious with some of these ferociously close canons after hearing how well the So Percussion players executed them while I was trying out early drafts of the piece! Paradoxically, perhaps, as the music tends more towards actual unisons in its latter parts, its mood becomes progressively broken and dark. Maybe there is a semantic undertone after all.

I think of the dialogue between pattern and texture in this piece as a kind of magic realism. I limited myself strictly to equal-tempered pitched instruments, despite the fact that much of my recent music plays with microtones to create a kind of harmony/timbre based on the overtone series. Here instead the very close canons transform in and out of something akin to a jingly-jangly pulsating resonance, the overtones spilling over each other.

Strictly in nine sections, the piece really separates into three larger parts – each accumulatively made up of a greater number of smaller sections (2, 3 and 4 respectively) – and each demarcated by the varied iteration of a type of material defined by the employment of very bright, close canons starting in C and then slipping away semi-tonally in a manner influenced by the harmonic language of Gesualdo’s later music.­ – Donnacha Dennehy

‘Amid the Noise’ is a set of short pieces exploring many forms of noise framed by drones and consistent yet subtly changing harmonies. They were conceived as small soundtracks for everyday moments in everyday life. It was written and recorded in 2006, but has been growing and changing ever since. – Jason Treuting