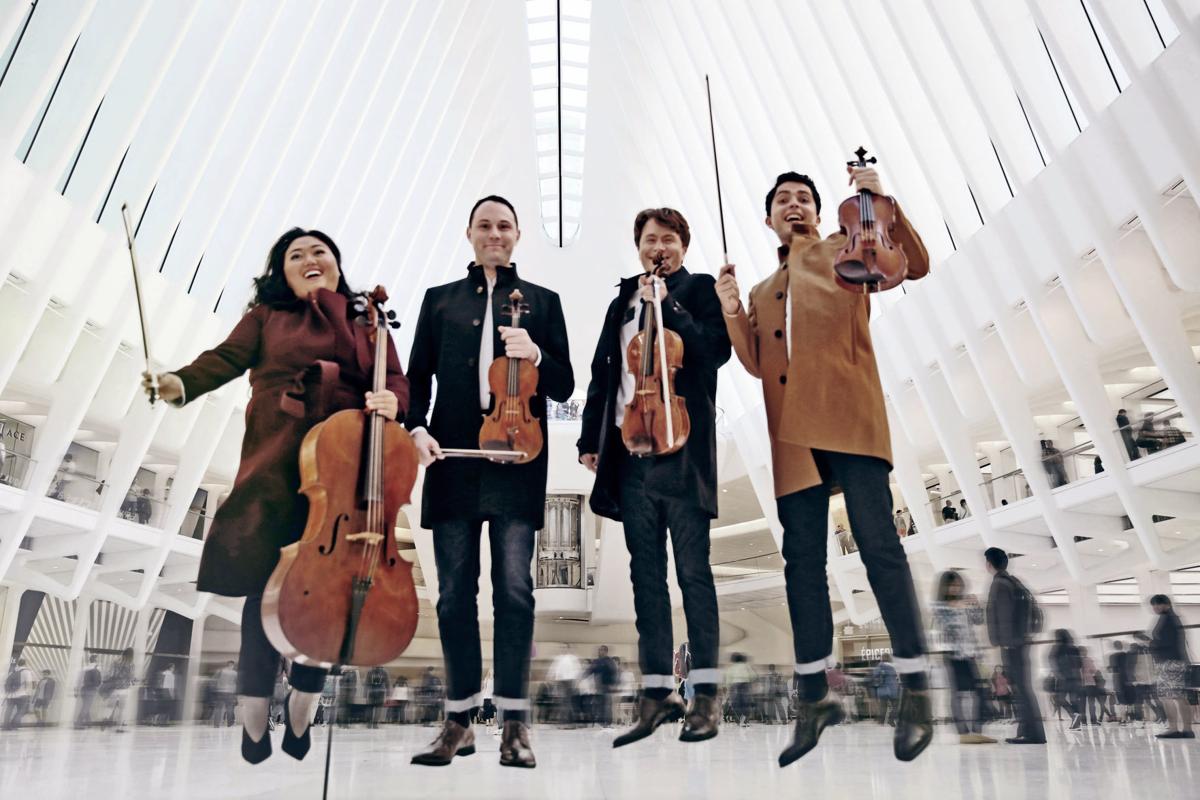 We open the season with one of today’s most vibrant and exciting young ensembles. Fresh Avery Fisher Career grantees, the Calidore String Quartet have prepared a program that combines characterful classics with a centerpiece by Caroline Shaw. Shaw, whom the Washington Post recently called the most ‘idiomatic composer’ for string quartet since Bartók, composed Three Essays specially for the Calidore Quartet last year. Violist Masumi Per Rostad joins them for Mozart’s last major chamber music work, composed the year of his death.

It was Haydn who catalysed the string quartet as a stable ensemble, and so it is largely to him that Bowdoin owes the institution of “Quartet Mondays”. While the instrumental lineup of two violins, viola, and cello was not unprecedented before Haydn, it had been no more than an occasional grouping – representing either ad hoc reductions of orchestral repertoire for more intimate settings, or soloistic compositions in the model of the Baroque sonata. When Haydn composed his first quartets at the age of 18, the instrumentation had arisen as a matter of happenstance: the Baron Karl Joseph von Fürnberg, who enjoyed reading music with a small group of close friends and amateurs, asked Haydn to furnish some new music for four of them to read. The success with which these early works were met inspired follow-ups; and over the next decade, Haydn had honed a quartet style rich in counterpoint, with the melodic material increasingly distributed among the four musicians. It was this new incarnation of the ensemble that gave rise to Goethe’s oft-quoted description of Haydn’s string quartets as “a stimulating conversation between four intelligent people.”

By the late 1790s, Haydn had scaled back his commitments to the Esterházy family, his lifelong patrons. Having undertaken two successful and lucrative tours to London earlier in the decade, Haydn now settled into an ample house in the Viennese suburbs where he would primarily spend the rest of his life, enjoying relative celebrity and creative freedom. The two pieces published as Op. 77 constitute Haydn’s 66th and 67th string quartets, composed in 1799 and constituting his final efforts in the genre (save a final quartet fragment published as Op. 103). Haydn composed the pair upon receiving a commission from the Joseph Franz von Lobkowitz – the young prince also commissioned, the same year, Beethoven’s first set of string quartets, Op. 18, setting into motion new prospects for the genre…

I fell in love with playing string quartets when I was about 10, and it’s been a love and obsession ever since. It’s an amazing way to converse musically with others, and you can really get a sense of someone’s personality through reading a quartet with them for the first time. I keep coming back to string quartets – despite the vast sonic possibilities now in the 21st century – because of the compactness and efficiency of it, and for the dialogue one can have with past quartet repertoire, both the hits and the hidden gems. One of the joys of writing is designing, destroying, and solving the puzzles of the language. It sometimes feels like designing my own game environment and then solving the problems that crop up.

The First Essay (“Nimrod”) began as a simple exercise in translating the lilt and rhythm of one of my favorite authors, Marilynne Robinson, into music. She writes beautifully and bravely on notions of the human soul, weaving delicately in and out various subjects (politics, religion, science) in each of her rich, methodical essays. Usually my music is inspired by visual art, or food, or some odd physics quirk, but this time I wanted to lunge into language, with all its complex splintering and welding of units and patterns! The piece begins with a gentle lilt, like Robinson herself speaking, but soon begins to fray as the familiar harmony unravels into tumbling fragments and unexpected repetitive tunnels. These musical trap doors lead to various worlds that are built from the materials of the beginning, like the odd way dreams can transform one thing into another. I started writing these three “essays” while listening to the calm optimism of an audio recording of Marilynne Robinson reading from her book The Givenness of Things, but I completed it during the turmoil of the 2016 US Presidential election. The title of the first essay refers to the legendary biblical figure Nimrod, who oversaw the construction of the Tower of Babel – a city designed to be tall enough to reach heaven but which resulted in the confusion and scattering of language. This image of chaos and fragmentation, but also of extraordinary creative energy, may serve as a framework for listening to these three musical essays. The Second Essay (“Echo”), is a stylistic contrast to the first and third, in the spirit of a typical ‘slow movement’ nested between two quick ones. The title touches on a number of references: the concept of the ‘echo chamber’ that social media fosters in our political discourse; the ‘echo’ function in the Hypertext Preprocessor (PHP) programming language; and of course the effect of an echo. The Third Essay (“Ruby”), returns to the fragmentation and angularity that was introduced in the first essay but attempts to tame it into some kind of logical structure. The title refers both to the programming language Ruby (developed in Japan in the mid-1990s) as well the simple beauty of the gem stone for which the language was named. It’s more a point of inspiration than a strict system of generating material.

Mozart composed the two string quintets K. 593 and K. 614 in the last year of his life – which means that they were nevertheless composed several years before the late Haydn quartet that opened the program. With the exception of a few short ensemble pieces for the recently invented glass harmonica, K. 614 constitutes Mozart’s final chamber music work. He had recently completed the “Prussian Quartets”, a set of three string quartets composed for the King Friedrich Wilhelm II. However, the addition of the second viola afforded Mozart an even denser medium, allowing him to go beyond the quartets in the manipulation of inner voices and in the variety of contrapuntal textures. The viola was, after all, the instrument Mozart most enjoyed playing, and this is reflected in his versatile viola writing: often, Mozart’s violas are in the spotlight, trading thematic material in tandem with the violins; at other times, they drive the expressive intensity from behind the scenes, through sustained drones or rhythmic pulsations. As the story goes, Haydn and Mozart gathered in Vienna in late 1790 to read through the first of these final quintets, with Haydn and Mozart trading off the coveted first viola part – an entirely plausible anecdote which is as tempting to believe as it is difficult to corroborate.

The specific motivation behind this pair of quintets has remained a mystery – unlike the “Prussian Quartets”, they lack an obvious patron. When the quintets were published posthumously in 1793, they bore the words, “Composed for a Hungarian amateur”. The leading hypothesis is that the “amateur” was the violinist and merchant Johann Tost, who had played in Haydn’s Esterházy orchestra, and had commissioned string quartets from the elder composer; however, any sale or dedication may equally have been made only after Mozart’s death, by his widow Constanze.