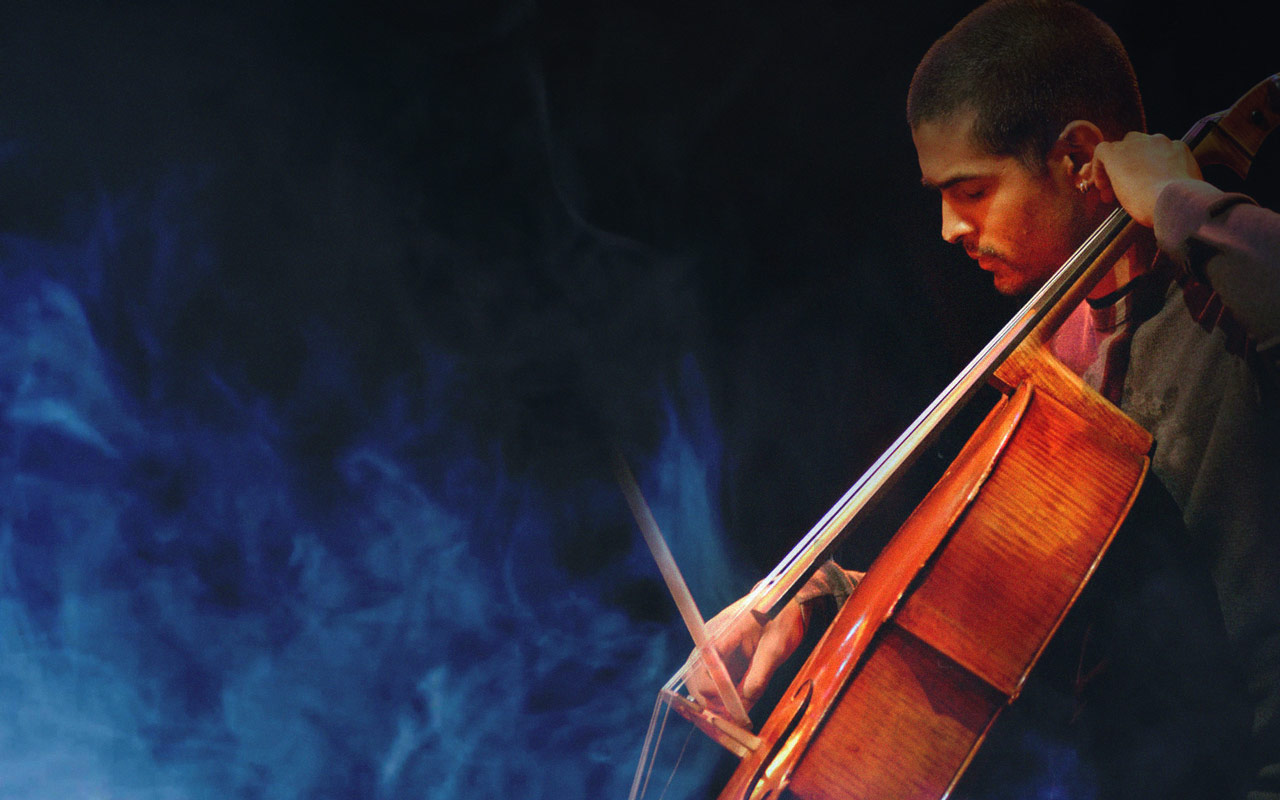 The season’s first Friday evening opens with Saint-Saëns’s luminous postcard from the Mediterranean coast, where he composed his Fantaisie at the young age of seventy. Kronos Quartet alumnus Jeffrey Zeigler interprets the work of Gambian-American composer Foday Musa Suso, who drew inspiration from the achievements of nineteenth-century botanist and inventor, George Washington Carver, for his 2018 work, Salumba. The second half takes a dramatic turn with Dvořák’s mature trio.

Fantaisie for Violin and Harp, Op. 124

At the turn of the twentieth century, Saint-Saëns enjoyed an extraordinary celebrity status and lifestyle, hailed around the world, literally, as France’s greatest composer. Indeed, his lifelong habit of trotting the globe persisted even has he entered his seventies, with his first tour of the United States taking place over two months in 1906; as musicologist Stéphane Leteuré has written, “Saint-Saëns never felt more at home than when he was traveling abroad.” Shortly after returning from his American voyage, Saint-Saëns found his way to the Côte d’Azur. Having assisted in the production of his opera, Le timbre d’argent, at Monte-Carlo, he retreated over the Italian border, taking up residence at the Hotel Victoria in the sunny town of Bordighera.

It was here that Saint-Saëns composed his Fantaisiefor violin and harp in less than two weeks. The harp, in particular, was an instrument that captured Saint-Saëns’ imagination. He conducted extensive research into the history of lyres and kitharas, harp-like instruments of Greco-Roman antiquity – particularly in connection with compositions in the 1890s to accompany amphitheatrical revivals of ancient Greek drama in southern France – and he had even published articles on the subject. Perhaps the sojourn along the Mediterranean basin reignited Saint-Saëns’s “classical” fascinations.

Another source of inspiration were Marianne and Clara Eissler, two Brno-born sisters who held positions as musicians to the Saxe-Coburg and Gotha court in Britain. The sisters premiered the Fantaisiein July, 1907 – one week after Saint-Saëns received an honorary doctorate from the University of Oxford.

Foday Musa Suso is an internationally recognized musician and a Mandingo griot – the historians and living libraries telling the stories of West Africa through both word and music. Born in 1950 and raised in rural Gambia – where he trained rigorously on the 21-stringed griot instrument called the ‘kora’ – he relocated to the United States in the late 1970s, and soon after began collaborating with Herbie Hancock. He has since created and performed music with many others, including Philip Glass and the Kronos Quartet.

Suso grew up farming peanuts, the chief crop of his home country. In the year 1890, George Washington Carver initially enrolled in college as a major in art. Though a man of many disciplines – painter, crocheter, educator, baker and more – he switched to study agriculture and is best known for his role as a botanist and chemist. He is referred to as “The Peanut Man,” for his creation of over 325 new products from the plant. This connection sparks a piece of music that celebrates Carver’s life as well as the pair’s shared appreciation for farming as a life force. Suso is delighted to tell Carver’s story (raised as a free man by the couple who had enslaved his mother and older brother), and fuse it with the extensive verbal and musical heritage that can only be passed down within a Griot family; Foday is a direct descendant of Jali Madi Wlen Suso, the griot who invented the kora over four centuries ago. As Suso composes this piece on kora, the sounds he is hearing in his head are those of the peanut farm – particularly the small plink of a little hole being formed in the ground by his finger, the space for a seed to be planted.

Dvořák composed his third piano trio at a crossroads between personal tragedy and professional triumph. On one hand, his mother had died in December 1882, and Dvořák remained heartbroken as he broke ground on the new trio six weeks later. On the other hand, his compositional work was beginning to receive critical attention and acclaim where it mattered the most, in Viennese musical circles. While this success might have brought him pride and encouragement, it also brought him a degree of personal insecurity.

While Dvořák had already made Czech folk idioms a core component of his musical style (consider the Slavonic Danceswhich had made him famous in 1878), he also perceived shifting tastes and xenophobia among certain Viennese musicians and audiences. In the early 1880s, members of the Vienna Philharmonic had objected to premiering works by Dvořák in consecutive seasons, and in 1884 Dvořák continued to feel as though “Viennese audiences seem to be prejudiced against a composition with a Slavic flavour.” His publisher, Simrock, compelled Dvořák to adopt some Germanicizing touches, such as noting his forename as Anton in favour of the Czech Antonín (they compromised on the ambiguous abbreviation “Ant.”). And Simrock, alongside the prominent critic Hanslick, entreated Dvořák to compose a German-language opera.

Composed amid these tensions, Dvořák’s trio does not contain the idiomatic gestures to Bohemian folk materials that program annotators never tire of highlighting in descriptions of his chamber music – although these materials would return manifoldly in Dvořák’s next trio, known as the “Dumky”, a decade later. Instead, the trio has been generally received as “Brahmsian”, reflecting Dvořák’s debts to the composer who offered him essential support and promotion early in his career. Nevertheless, this trio led Hanslick to declare that Dvořák had arrived at the “pinnacle of his career”, worthy of consideration “among the world’s greatest modern masters.”