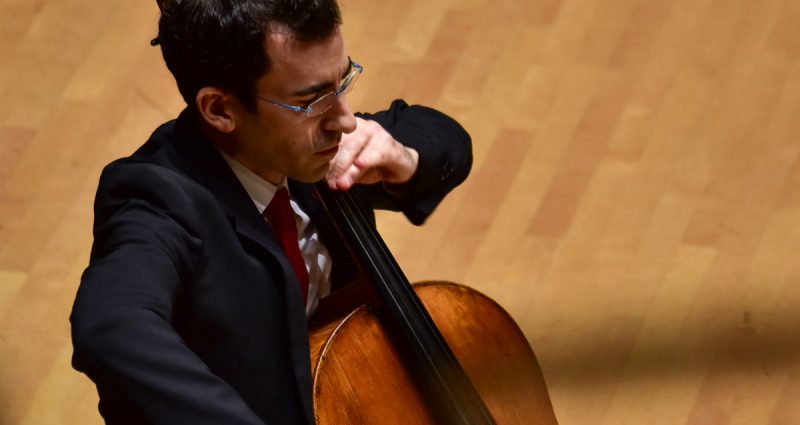 Indian sitarist Ravi Shankar, who devoted much of his career to spreading Hindustani classical music around the world, was nothing if not musically versatile, collaborating with Philip Glass, Yehudi Menuhin, and of course, George Harrison. Shankar continues to bring musical cultures into contact in his ‘Enchanted Dawn’, which opens this evening’s program. Then, a chance to hear the Violin Sonata of Respighi, himself an accomplished violinist, a piece which culminates in an energetic passacaglia and sets the scene for Brahms’s final piano trio.

Ravi Shankar’s illustrious career was shaped by his desire to promote the classical musical traditions of India around the globe. Born in Varanasi in 1920, Shankar joined his elder brother’s Paris-based dance company at age ten, and spent his adolescence on an intense worldwide touring schedule, bringing him into contact with a wide range of musicians and audiences. At 18, Shankar decided to return to India to devote himself to years of full-time training with a focus on the sitār; soon thereafter, he began performing as a soloist, distinguishing himself through his technical innovations and creative versatility. During the 1950s, he began touring across Europe and the United States, and over subsequent decades undertook collaborations with a variety of celebrity musicians, including George Harrison of the Beatles, composer Philip Glass, violinist Yehudi Menuhin, and cellist Mstislav Rostropovich.

Another collaborator of Shankar’s was with French virtuoso flutist Jean-Pierre Rampal, for whom Shankar composed L’Aube Enchantée (“Enchanted Dawn”) in 1976. Unlike much of the music Shankar himself performed, which frequently contained passages of improvisation, L’Aube Enchantée is fully notated. Nevertheless, Shankar infuses the duo with several formal and stylistic elements of Indian classical music. He draws the pitch relations and ornamentation from the raga known as “Todi”, and organises the work into four sections, adapted and compressed to proportions for a Western concert setting: (1) an opening alap, a slow and free exploration of the raga marked “senza misura”; (2) the jor, rhythmic and gradually accelerating into (3) the gat, in which the harp plays the role of percussionist, maintaining a sixteen-beat metrical pattern; and finally (4) the jhala, pulsing the work to a virtuosic finish.

Violin Sonata in B Minor

Born in Bologna, Ottorino Respighi took violin lessons from a young age, eventually enrolling at the Liceo Musicale and furthering studies in violin, viola, and composition. Upon graduation, work brought him to the Imperial Theater in St. Petersburg, where he spent two seasons playing viola for the orchestra, and had brief but influential lessons in orchestration with Rimsky-Korsakov. He returned to Bologna and continued making a living as an orchestral and chamber player, composing on the side and achieving local success. But his career began to take off with the international triumph of his transcription of Monteverdi’s Lamento d’Arianna for voice and orchestra in 1908, followed by the premiere of his opera, Semirâma, in 1910. In 1913 he relocated to Rome, where he obtained a permanent teaching post, and committed himself more fully to orchestral music; his Fontane di Roma, completed in 1916, was a spectacular success, and was followed upon by several more tone poems over the subsequent decade, for which he remains most famous today.

Meanwhile Respighi was developing not only as a composer but also as a musicologist. In addition to his Monteverdi transcription, he was an authority on the baroque and classical music of Italy, and became an exponent of the music of Vivaldi, Corelli, and many others. His musicological expertise informed his compositional output: his three orchestral suites, Ancient Airs and Dances (1917), are modeled on sixteenth- and seventeenth-century lute compositions.

Respighi composed the Violin Sonata in B Minor in 1917, as he was enjoying the reception of Fontane and the Ancient Airs, and it was premiered the following year. It is a dramatic and Romantic composition, one which Respighi regarded with particular favor. His interest in early music is given pride of place in the finale, composed in the form of a passacaglia – a baroque genre closely associated with Frescobaldi. The piano introduces the ten-measure progression which repeats and undergirds the rest of the movement.

Brahms’s Piano Trio No. 3 was another composition to emerge from the composer’s inspired summer of 1886 at Hofstetten, on Lake Thun, Switzerland, alongside his Violin Sonata No. 2 (performed on Wednesday, June 27 ) and his Cello Sonata No. 2. The Trio exemplifies the concision which Brahms developed in his later compositions. It is composed with careful thematic economy, with the ascending four-note segment from the opening theme becoming the basis of the movement’s second theme. As Brahms’s final trio, it is also his shortest, at about half the length of his indulgently expansive first trio – although three years later he would revisit that first trio, originally composed in 1854, to trim it by nearly a quarter, demonstrating his concern for compactness, as well as his constant perfectionism.

In addition to the formal and motivic innovation, Brahms experiments rhythmically, particularly in the Andante movement. Sketches for the movement show that Brahms had attempted writing the movement in a time signature of 7/4; but in the end, he found the unusual solution of composing alternating measures of 3/4 and 2/4, with a middle section in the compound metrical equivalent, alternating measures of 9/8 and 6/8.

Brahms’s dear friend Clara Schumann, who was at that time chronically ill, sought refuge in Brahms’s music and was especially moved by the Trio. “At last I felt strong enough to try the wonderful, touching Trio in C Minor,” she wrote in her diary. “What a composition it is! Ingenious throughout in its passion, its power of thought, its grace, its poetry. No other work of Johannes’s has ever transported me so completely…”