Piano Lessons on Park Row
A Conversation with Sally Haggett 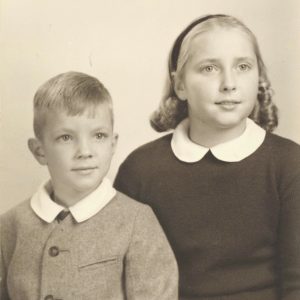 Though she’s technically “from away” having been born in Ohio, Sally True Haggett clearly feels a strong, deep connection to the city of Bath. Anecdotes she shared about summertime on the New Meadows River and attending community concerts were full of undeniable hometown pride.

Festival staff members recently sat down (over Zoom) to talk with Sally, a committed Festival supporter and concertgoer. She shared stories of her long history in the City of Ships, speaking with pride about the tremendous growth and development that’s taken place there over the course of her tenure. We also spoke about her connection to 181 Park Row, a historic building in downtown Brunswick that has housed the Festival offices since 2007 and which the Festival purchased in 2020.

According to Sally, Bath and Brunswick have a history of friendly rivalry: she went as far as to write to her local paper to express her dissatisfaction when a staff writer consistently misrepresented her hometown, painting Brunswick in a “brighter light.” While she likely cheered for Bath at sporting events — Bath vs. Brunswick games were always particularly heated — it was in Brunswick that Sally found her piano teacher.

The Tillotson household at 181 Park Row was known by many in Brunswick. Attic rooms were routinely rented to Bowdoin College students, and the lower rooms were often filled with guests enjoying musical evenings and sipping cocoa. Professor Tillotson, fondly known as Tilly, was the chair of the Bowdoin College Music Department, and his wife, Marjory, taught piano.

Sally doesn’t recall how Marjory Tillotson became her instructor, but she does remember that she and her mother carpooled to Brunswick with Loyall Sewall, one of Sally’s classmates and a fellow piano student, and his mother. At the age of about 10, Sally started her piano lessons in the latter part of the Second World War, when gas was rationed. She doesn’t recall whether she and Loyall waited for each other during their lessons, or what exactly their mothers got up to in town, but a trip to Brunswick was a weekly excursion to look forward to.

“My biggest worry was that I’d have to perform,” Sally said, mentioning a sleepless night or two at the prospect. The one performance that had been scheduled was canceled due to snow and never rescheduled by Marjory, a story that Sally shared with some relief. Marjory insisted upon the use of a metronome in practice and wouldn’t allow popular tunes to be played (“I don’t think she had any use for them,” said Sally). Memories of Marjory seated next to her at the piano seem to be among Sally’s strongest, along with her early piano pieces: Bach Two-Part Variations, Clementi Sonatinas, and selections from Schumann’s Album für die Jugend (Album for the Young). She also recalls Marjory’s son Clive popping in from time to time at the end of his school day, or Tilly making the occasional appearance to weigh in on piano fingering decisions. Sally was sure to add that she remembers a kind person in Marjory, a welcoming home at 181 Park Row, and “feeling like one of the family.”

By the time she was 13 years old, Sally had stopped taking lessons with Marjory, but she still keeps a few of her old scores in her home in West Bath, complete with her teacher’s piano fingerings written in. Though she no longer plays, she shares with great pride that her granddaughter does. Piano remains her favorite instrument, and she makes a point of seeking it out when she attends concerts. Though she hasn’t been back to 181 in years, she says she’ll pay a visit to the Festival offices one day: “I’ll drop in someday and see if my sense of direction leads me to the room with the piano.”

We thank Sally for making time to chat with us and invite others to share stories and memories of the Festival’s home at 181 Park Row. 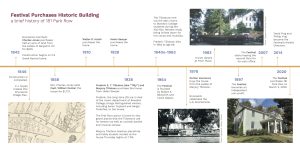