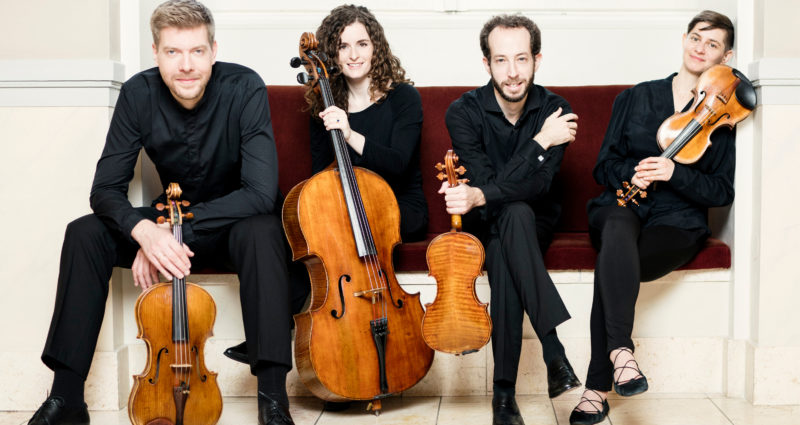 This curious piece, composed by Mozart shortly after he settled in Vienna, belongs to a set of six quartets dedicated to Haydn and known collectively as the “Haydn Quartets.” Mozart drew inspiration from that elder statesman of the string quartet, who continued to set the bar for the genre with his own set of six quartets, Op. 33. Mozart pored over these works, assimilating Haydn’s consummate craftsmanship while adapting the genre to his own voice; if Mozart is famed for the ease and spontaneity with which he effused musical ideas, this batch of quartets represented, in the composer’s words, “the fruits of a long and laborious endeavor”—a testament to his earnestness in preparing to offer his work to Haydn.

Few bars of music have provoked as contentious a response as the “dissonant” opening bars of K. 465. Over the cello’s pulsating C, the upper instruments enter one by one—first the viola drones an A-flat; then the second violin, an E-flat; then the first violin, an A-natural, at which point the viola slips down to G—resulting in a distended half-diminished sonority and, three bars of gnarled counterpoint later, a resolution to the distant key of B-flat minor, whereupon the sequence repeats itself.

The reaction of nineteenth-century Belgian musicologist François-Joseph Fétis to Mozart’s opening gambit was not unusual, and set the tone for years to come. Writing in 1829, Fétis lauded the quartet as a “masterpiece,” but singled out the “bizarre” introduction that “tests artists’ nerves,” in which Mozart “took pleasure in torturing a delicate ear”—or else was the victim of “some ignorant copyist.” Fétis rewrote the idiosyncratic introduction according to rules set out in his own counterpoint treatise, ironing out the “offending” dissonance. Yet sure enough, when Fétis later encountered the original manuscript on a trip to London, he found, to his stupefaction, that “the passage, so often criticized, was written by Mozart without any crossing-out; the inconceivable, pointless dissonances, which shred the ear, are there, notated in his own hand.” Fétis’s testimony did not prevent future critics and editors from proposing their own “repairs” to Mozart’s work—including six alternative introductions proposed in 1832 by Gottfried Weber—and even when interpreting Mozart’s opening as written, performers must choose whether to try to smooth over, or lean into, these taut sonorities.

Yet, attention to these enigmatic bars of introduction risks overshadowing the effusive joy and mastery of craft that reigns over the rest of the quartet—the qualities that led, in the months following Mozart’s dedication of the set, to Haydn’s famous remark to Amadeus’s father, Leopold: “Before God and as an honest man I tell you that your son is the greatest composer known to me either in person or by name.”

The Judeo-Spanish language, also known as Ladino, was originally spoken in Spain but after the Edict of Expulsion in 1492 spread across the Balkan, Turkey and Morocco among Jews. These Four Ladino Songs were chosen from a rich heritage of folksongs, almost all of which are dealing with the themes of love and pain. The quartet is in three contrasting movements. The first movement consists of two songs, “Los Bilbilicos” and “Yo Era Ninya,” and depicts the yearning of a faraway loved one. The second movement is a scherzo, full of humor and wit, on the text of “mi suegra, la negra,” a humorous text about an evil stepmother who makes the life of the bride miserable. The final movement is a theme with seven variations on “Durme, Durme,” which concludes with the quartet singing the theme and nursing a baby to sleep. The quartet was commissioned by the University of Cincinnati College-Conservatory of Music, for the 20th Anniversary of the Ariel Quartet, and first performed at the Cincinnati Conservatory of Music in October 2020.

Béla Bartók’s six string quartets, composed between 1909 and 1939, represent one of the great cycles of twentieth-century chamber music; and the Fifth Quartet, composed in one month over the summer of 1934, may be the cycle’s summit, combining several of Bartók’s dearest musical values—symmetry, folklorism, and intense modal and rhythmic vitality.

Its symmetry inheres in the five-movement “arch” form: a central Scherzo is surrounded by two slow movements, which are themselves framed by vibrant fast movements. The Scherzo, written “in the Bulgarian style,” reflects Bartók’s research into the region’s so-called “limping” time signatures—in this case, bars of (4+2+3)/8—inherited, it is believed, by way of Eastern European contact with Ottoman musics. (It is significant, in this context, that Bartók was appointed that same summer to his dream job as a full-time ethnomusicologist at Budapest’s Academy of Sciences.) The two slow movements exemplify the languorous dissonances of Bartók’s eerie “night music” style. And the Finale swirls around a rapid-fire pulse, interrupted only briefly by an ironically detached episode—marked, “mecanico” and “con indifferenza,” and echoing back to the opening theme of the first movement—before throttling, prestissimo, toward a sudden but emphatic conclusion.

The quartet was commissioned by and dedicated to one of the great twentieth-century patrons of new music, Elizabeth Sprague Coolidge, who, in addition to Bartók, used her inheritance to sponsor important works by such leading composers as Britten, Ravel, Schoenberg, Stravinsky, Webern, and Copland (most famously, Appalachian Spring). Coolidge’s open-minded ethos was a modernist artist’s dream; and if she was not always enamored of the music to which her patronage gave voice, her commitment to offering artists complete creative freedom was unwavering: as she put it, “My plea for modern music is not that we should like it, nor necessarily that we should even understand it, but that we should exhibit it as a significant human document.”