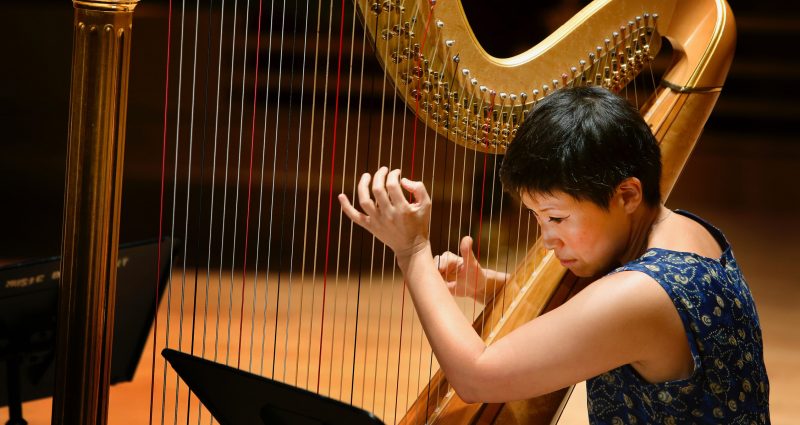 The five short movements of Night Time – Dusk, Sleepless, Vespers, Nightwind, and Starlight – share a sense of quietude, introversion, intimacy, and subdued restlessness.   The instrumental ensemble itself, violin and harp, suggested to me right from the start a series of nocturnal moments, where a sense of isolation, distance and quiet thoughtfulness would prevail throughout otherwise thematically contrasting movements.  From the distant murmuring sounds in Dusk to the disquiet of the pizzicato ostinato and muted chords in Sleepless, from the contemplative lyricism of Vespers to the rushing passage work in Nightwind, and in the hypnotic figurations of Starlight there is an affinity with a phrase of a Wallace Stevens poem, that I set in another work, Vocalissimus: “in the distances of sleep.” The piece was written for Marie-Pierre Langlamet, harpist of the Berlin Philharmonic, and violinist Jean-Claude Velin. It was premiered at the Philharmonie in Berlin in 2000.

Tchaikovsky had the notion to compose a string sextet as early as 1887. The previous year, he had been presented honorary membership in the St. Petersburg Chamber Music Society, and he promised his friends in the organization a new chamber composition in gratitude. But in 1890, when Tchaikovsky began composing the music in earnest, it did not come easily to him. He struggled with the texture of the string sextet. He wrote to his friend Aleksandr Ziloti of how it was “terribly difficult working in this new form; it seems that rather than writing for six voices, I am, in essence, composing for the orchestra, and only then arranging it for six string instruments.” Indeed, Tchaikovsky had just been laboring over The Queen of Spades and The Nutcracker, and may have struggled converting the momentum from these large-scale projects to the more intimate chamber music setting.

Tchaikovsky’s breakthrough on the Sextet came following a stint in Florence, a favorite vacation spot of his. While there, he stayed at a villa owned by his most faithful benefactress, Nadezhda von Meck – an interesting and by all accounts extraordinary woman, whom Tchaikovsky considered his “best friend,” despite their mutual agreement to never meet face to face. If Tchaikovsky found inspiration and respite in Florence, however, he set down the composition upon his return to Russia, infusing the later movements with distinctly Russian themes. In the end, the composition’s wistfully programmatic title refers more to Tchaikovsky’s nostalgia for the city than to any musical evocation of Italy.

After initial anxieties following the Sextet’s unsatisfying premiere, Tchaikovsky undertook significant revisions and rewrote large sections of the third and fourth movements. When the Sextet was reintroduced, Tchaikovsky was giddy with pride: “What a sextet!” he wrote to his brother, Modest, “and what a fugue at the end – it’s a pleasure! It is awful how pleased I am with myself.”