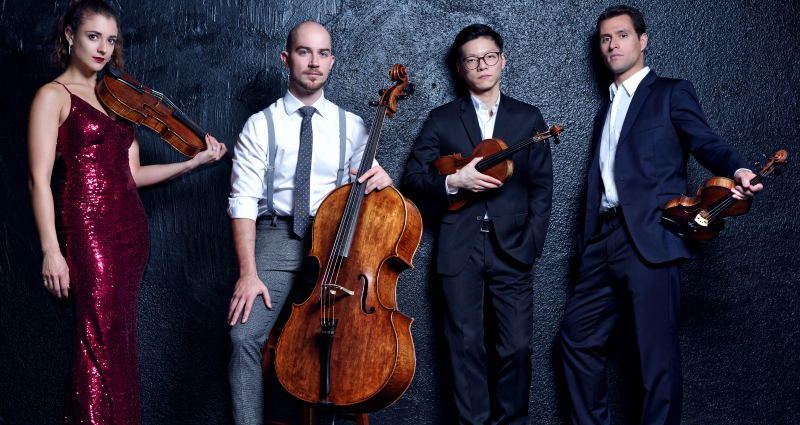 The Dover Quartet residency is generously supported by Elliot Rosen and Sharon Cohen.

Biographers tend to classify Schubert’s Quartettsatz as the first among the composer’s ‘late’ (or ‘mature’) chamber music works – but ‘lateness’ is relative, and Schubert was not quite 24 years old when he embarked on this composition. It is clear, in any case, that this movement is a far cry from the quartets of Schubert’s adolescence, many of which were composed for performance with his father and siblings. The far greater technical demands of the Quartettsatz, in contrast, lean toward the chamber music of his final years, including the famed “Rosamunde” and “Death and the Maiden” quartets.

It seems clear that Schubert had initially set out to compose an entire quartet, not a standalone movement. The best evidence for this was discovered by Johannes Brahms, who was not only an early and enthusiastic devotee of Schubert’s work, but who also undertook the first critical edition of Schubert’s complete œuvre. Brahms obtained the Quartettsatz manuscript and saw to its publication in 1870, half a century after it was composed; in that manuscript, he also found forty-one measures of an abandoned Andante movement, following on from the completed Allegro. Composers and scholars like Brian Newbould and Livingston Gearhart have attempted speculative completions of this tantalizing musical fragment.

It is difficult to contemplate the Quartettsatz without thinking of Beethoven, whose specter must have weighed on Schubert’s mind as he undertook to compose for a genre (and in a key signature) upon which Beethoven had, even by 1820, made his lasting mark. The tremulous gesture which opens – and closes – the movement establishes a feverish frame, weaving into, and back out of, sunnier secondary and closing themes and providing the movement a haunting symmetry without closure.

Mendelssohn’s “String Quartet No. 1” is something of a misnomer: although Op. 12 was the first quartet Mendelssohn published, it was not the first, or second, but third string quartet he completed. And that’s not counting the dozen fugues for string quartet composed by the young prodigy shortly after his twelfth birthday under the watchful eye of his teacher, Carl Friedrich Zelter.

When Mendelssohn returned to quartet writing in 1827, his principal model was Beethoven, whose late quartets, composed during the years 1824–26, had just been published. While these works frustrated many listeners and composers who viewed them as indecipherable (or not worth deciphering), the eighteen-year-old Mendelssohn was transfixed. It was in the wake of this revelation that Mendelssohn composed his next two quartets (Opp. 13 and 12), which represent, in the words of musicologist Scott Burnham, “the enigmatic sounds of [Beethoven’s] late style incorporated into the melodramatic emotional life of adolescence.”

Mendelssohn composed Op. 12 toward the end of a sojourn in Great Britain in 1829. He had spent several months immersing himself in London’s vibrant cultural life, taking in Shakespeare’s plays and consulting Handel’s manuscripts. He introduced the English audience to his own first Symphony and Midsummer Night’s Dream overture, and performed Beethoven’s “Emperor” Concerto to great acclaim. And amid these activities and enticements, Mendelssohn found time to begin composing his string quartet, although the process was interrupted by the tour of Scotland on which he embarked that summer—which led to his “Scottish” Symphony and Hebrides Overture—and he completed it upon his return to London that September.

Dvořák’s most famous string quartet is the one he composed in Spillville, Iowa – his twelfth, nicknamed “the American.” Dvořák composed that quartet in 1893 while on summer holiday from the National Conservatory in New York City, where he had taken up the directorship a year prior. However, despite his success in America and the richness he found in America’s many musics, by the following year Dvořák began to feel pangs of homesickness, which were exacerbated by a trip home during the summer of 1894. Between teaching responsibilities and administrative anxieties, he could not devote as much time to composition as he would have wished. “It would be best to be back in Vysoká,” he wrote, referring to his country property in Bohemia. “I am refreshed there, I rest, I am happy. Oh, if only I were home again!” With the end of the 1895 academic year, he set off back to Europe, and in August he informed the President of the Conservatory, Jeannette Thurber, that he would not be returning in the autumn.

Once back in Bohemia, Dvořák first seized the opportunity to rest – “I’m just lazing around and haven’t touched my pen,” he wrote to a friend. After four relaxing months, he returned to some unfinished business. He wrapped up one string quartet which he had begun in the States (which would become his “fourteenth”); and began this, his “thirteenth” quartet, and which he described on the manuscript score as “my first composition after my second return from America.” In this quartet, in particular, he sets out in new stylistic directions. In place of the lyricism of melodies which readily spin forth from his previous quartets, the opening theme is a string of short motivic gestures. These gestures become separate and develop independently throughout the movement – and will even make reappearances in the Finale.