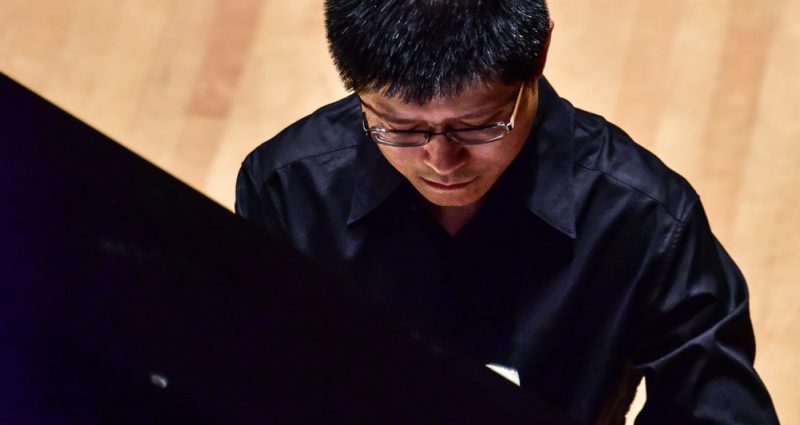 The year 1781 represented a turning point in Mozart’s life: he managed to sever (not without bitterness) his employment for the Archbishop Colloredo, a contract which had tied him to Salzburg in conditions he felt were so stifling and undignified that he would prefer staking out a living as an unattached freelance musician in Vienna. Upon settling there, it did not take long for him to distinguish himself as the city’s most brilliant keyboardist. In his early Viennese days, Mozart primarily made his living by offering piano lessons to a small handful of pupils.

It was for one of these pupils, only two years his junior – the pianist, composer, and daughter of a court official, Josepha von Auernhammer – that Mozart composed his Sonata for Two Pianos, K. 448. The dedication may come as a surprise, given the repugnant terms in which Mozart described his student in private correspondence – a “loathsome, dirty, horrible” woman, an “amorous fool” who had fallen “sérieusement in love” with him. These crude letters frankly reveal more about Mozart’s ego than they do about von Auernhammer, and he begrudgingly admitted, amid many further insults, that her playing was “enchanting.” A more reliable indicator of the respect Mozart had for his student, beyond his posturing, is the fact that he entrusted to her the task of editing a number of his compositions, and, in addition to the present work, dedicated several Sonatas for Violin and Piano to her.

While Mozart had composed amply for four-hands piano – starting with several adolescent works written for performance alongside his elder sister, Nannerl – this was the first and only Sonata he would compose for two pianos. The additional instrument neutralizes the division of registral labor which by necessity characterizes four-hands compositions, allowing the two pianists to freely exchange the melodic spotlight and to interlock their virtuosity across the full span of the keyboard.

When Dvořák composed his second piano trio, he had yet to make his major breakthrough on the world stage. He was working as organist at the Prague church of St. Vojtěch (known as St. Adalbert in English), while preparing each year a portfolio of compositions for evaluation in efforts to secure a stipend from the Austrian State. The Trio was part of Dvořák’s 1876 batch – alongside a string quartet, a symphony, and an arrangement of his Stabat Mater. Dvořák’s 1877 submission would famously seize the attention of Johannes Brahms, who introduced his work to the prominent publisher, Simrock, launching Dvořák’s international career. But in 1876, he was pleased to earn the 500 gulden awarded to him by the prize jury, enough for him to leave his job at St. Vojtěch’s.

Moreover, the financial support was crucial, as Antonín and his wife Anna were starting to build their family. Their first son, Otakar, was born in 1874, and their daughter, Josefa, was born in 1875, but died two days later. Those who listen for traces of autobiographical circumstances in artists’ outputs have identified a note of tragedy in Dvořák’s work in the months following Josefa’s death, including in the Trio. This program annotator is less easily convinced, given the trio’s wide emotive range, which lends itself to strife and joy in equal measure. It is plausible, however, that when choosing to compose a trio in G minor, Dvořák thought of the “father of Czech music,” Bedřich Smetana, whose only piano trio, likewise in G minor, was written to memorialize his own daughter after her death at the age of four. In any case, the Trio demonstrates Dvořák’s attention to details of construction: the two-chord statement with which the Trio opens becomes a recurring motif – to be developed into a full-fledged theme with the opening of the Finale – followed by a deliciously contrapuntal primary subject.