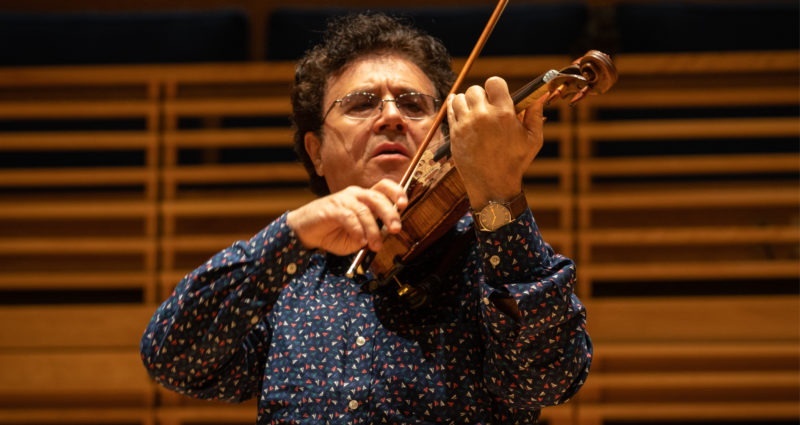 At the turn of the twentieth century, Saint-Saëns enjoyed an extraordinary celebrity status and lifestyle, hailed around the world, literally, as France’s greatest composer. Indeed, his lifelong habit of trotting the globe persisted even as he entered his seventies, with his first tour of the United States taking place over two months in 1906. As music historian Stéphane Leteuré has written, “Saint-Saëns never felt more at home than when he was traveling abroad.” Shortly after returning from his American voyage, Saint-Saëns found his way to the Côte d’Azur. Then, having assisted in the production of his opera, Le timbre d’argent, at Monte-Carlo, he retreated over the Italian border, taking up residence at the Hotel Victoria in the sunny town of Bordighera.

It was here that Saint-Saëns composed his Fantaisie for violin and harp in less than two weeks. The harp, in particular, was an instrument that captured Saint-Saëns’ imagination. He conducted extensive research into the history of lyres and kitharas, harp-like instruments of Greco-Roman antiquity—particularly in connection with compositions in the 1890s to accompany amphitheatrical revivals of ancient Greek drama in southern France—and he had even published articles on the subject. No doubt the sojourn along the Mediterranean basin reignited Saint-Saëns’s “classical” fascinations.

Another source of inspiration were Marianne and Clara Eissler, two Brno-born sisters who held positions as musicians to the Saxe-Coburg and Gotha court in Britain. The sisters premiered the Fantaisie in July, 1907—one week after Saint-Saëns received an honorary doctorate from the University of Oxford.

“I think of myself, and have been described as, a poet-composer. I sculpt my music akin to how poets create, refine, and polish their poems.”

The Huffington Post wrote of Augusta’s music, “This is music that is always in motion, as if coming perpetually out of a magician’s hat. It leads but doesn’t direct, and is playful and subtle, dancing on light feet. It is music that conjures.”

Musicologist Todd E. Sullivan wrote: “Verses by the reclusive Amherst, Massachusetts, poet have regularly inspired Thomas’s compositions. Emily Dickinson’s poems are intensely personal, intellectual, introspective, and offer a meditation on life, death, and poetic creation; her poems share a close observation of nature as well as consideration of religious and philosophical issues.” In the early part of the century, Thomas drew lavishly from Dickinson’s oeuvre in a cluster of vocal and instrumental compositions: Rise Chanting for string quartet (2002), Chanting to Paradise for solo soprano, SATB chorus, and orchestra (2002), Sun Songs: Three Micro-Operas (2004) for solo mezzo soprano and three percussion, Purple Syllables (2004) for SATB chorus, and Gathering Paradise (2004) for light lyric soprano and orchestra. Somewhat later, she set Dickinson poems in Juggler of Day (2007) for SSAA choir and Of Being is a Bird (2015) for light lyric soprano and ensemble.”

Mr. Sullivan goes on to write and to quote Thomas: “The voice and poetry are integral parts of Thomas’s compositional process: ‘For me, the human voice—possibly the most subtle, complex, and fragile

yet forceful, flexible, seductive, and persuasive carrier of musical ideas and meanings—has always been an inspiration for and influence upon my entire musical thinking. I sing when I compose. I adore reading poems, and cherish the opportunity to set them to music.’”

Stardust for Flute and String Quartet is dedicated with admiration and gratitude to Christopher L. Willis on the occasion of his 65th birthday.

Tonight’s performance is a world premiere of the flute version of Stardust.

Do not be fooled by the single-digit opus number of Brahms’ B Major Trio: the work you will hear tonight, sometimes described as “Brahms’ first and last piano trio,” is that of the mature composer: The “first” trio, because Brahms completed it at age 20, freshly energized by meeting Robert and Clara Schumann, with whom he would become lifelong friends. The Schumann’s early encouragement spurred young Brahms to complete the work, then publish it with the legendary firm Breitkopf & Härtel. The “last” trio, because when the Simrock publishing house acquired the rights to the Breitkopf catalogue, they offered the composer, now in his late fifties, the opportunity to revise earlier works as he wished. Brahms—with three-and-a-half more decades as a composer, critic, and editor, not to mention two more trios under his belt—seized the opportunity to revise his Op. 8 Trio so substantially that he joked it might as well be called his “Op. 108.” His modifications mainly involved streamlining: he tightened up floundering transitional passages, rendering development sections more concise and goal-oriented and ultimately shortening the work by about a third of its original length; and he stripped back extraneous ornamentation—for example, passages of violin filigree above the cello’s opening theme—resulting in a more majestic solo statement that builds anticipation for the violin’s entrance, nearly a minute into the work and all the more impactful for the delay. The movement that remained most intact, fittingly perhaps, was the Scherzo, in which the elder composer wisely let his younger instincts shine through.

The performance history of the original Op. 8 Trio, among the first of Brahms’s works to cross the Atlantic, offers a scintillating glimpse into how Brahms and his music, then all but unknown, were experienced in mid-nineteenth-century America. Wrote the Bostonian critic: “It has some strange and powerful effects, some ingenious combinations, remarkable for a mere boy … It seemed very enterprising, very adventurous, very self-confident, full of bold grasping after ideas, but we were never satisfied that the ideas really were ideas … Brahms is still future to our humble comprehension.” The critic’s bemusement aroused another member of the public to submit a letter to the editor: “I heard this composition at the Soirée of the German Trio, and make bold to say that, to my humble comprehension, that future promises another Beethoven.”