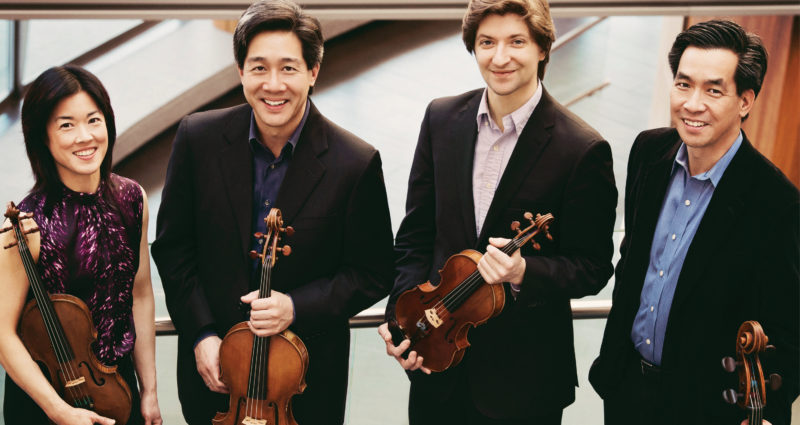 This evening’s two contrasting string quartets reflect the versatility of Dvořák’s compositional voice, a quality that proved critical to his professional success. They were written on either side of 1880—a pivotal moment in the composer’s career, when he was beginning to enjoy truly international acclaim: he had been granted generous prizes from Austrian State Stipendium each year from 1874-78, having impressed an illustrious jury comprising Brahms and the influential critic Eduard Hanslick, among others. With Brahms’s support, Dvořák’s music caught the attention of German publishers with vast networks; and by the end of the decade, his Slavonic Dances for piano had been performed across Europe and even in North America.

While Dvořák had several string quartets already under his belt by this point, his String Quartet No. 10, composed in the early months of 1879, marked something of a turning point—a maturation of the distinctive compositional approach that he had developed through the assimilation of traditional Czech elements into classical forms. The impetus came when, in the wake of Dvořák’s success with the Slavonic Dances, the violinist Jean Becker, leader of the Florentiner String Quartet, commissioned the composer to write a quartet in his “Slavic style”, which Dvořák obliged, thus bringing his hybrid approach to bear upon this most celebrated of Viennese genres. The most explicit nod to eastern European forms comes with the second movement, stylized as a dumka—the melancholic genre to which Dvořák would often have recourse, epitomized most famously by his “Dumky” Trio a decade later—and invigorated by the contrasting furiant, a Czech peasant dance, in the middle section. But the other movements, too, interweave more subtle gestures toward elements of folkloric style, whether the second theme of the opening movement—a duple meter often heard as an allusion to the polka—or in the accented syncopations that dynamize the Finale.

For his subsequent String Quartet, No. 11, composed two years later, Dvořák took the opposite tack, turning his back on folkloristic allusions in order to embrace a distinctly Viennese idiom. Perhaps, once again, the impetus for this stylistic approach came from the source of the commission—in this instance, Josef Hellmesberger, a prominent personage from a dynastically musical Viennese family. Hellmesberger had been director and professor of violin at the Vienna Conservatory and concertmaster of the Court Opera orchestra, a role previously held by his father, Georg Hellmesberger. In 1849, Josef had formed a string quartet, which his son, Josef Jr., joined in 1870. The Hellmesbergers thus represented a distinctly Viennese musical establishment, and Dvořák bore their legacy in mind while fulfilling the commission, which was a sufficiently significant honor to draw Dvořák temporarily away from the ambitious operatic project, Dimitrij, that had been occupying him at that time.