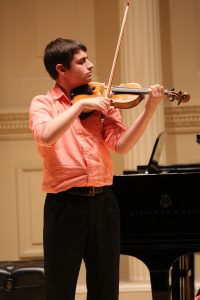 This past summer the Bowdoin International Music Festival welcomed 255 student participants from 27 countries and 30 states, including 17 remarkable Festival Fellows. Sixty-five percent of these participants received scholarship funds from the Festival. In celebration of an incredible 2016 season and in anticipation of an even better 2017 season, we’ve reached out to last year’s participants to reflect on their experience at the Festival and their lives as musicians.

BIMF: What are some of your earliest musical memories?

Lev: When I was seven years old, I was given my first violin.  While I had played on other instruments before, they were all rented or loaned. That one was the first one that I actually owned. It was super exciting! There’s a sort of connection you form with your own instrument that is lacking with a rental. While I naturally have outgrown that violin now, I still have it around today. It’s still quite important to me.

BIMF: At what age did you start playing your instrument?

Lev: I first started playing the violin when I was four years old. My neighbor was a violinist, and I greatly enjoyed hearing her play. As I firmly believed that I had achieved mastery of both my family’s piano and guitar, I decided to move on to a new challenge. This time, however, my parents insisted that I take lessons.

BIMF: Does the instrument you play on have a story?

Lev: I play on a 1924 Virzi violin that I purchased in Seattle shortly before I moved to New York City.

BIMF: What is the longest you’ve ever spent preparing a piece of music?

Lev: I spent eight months preparing Saint Saens’ Third Violin Concerto for my conservatory auditions in 2015. This was particularly exciting, as while I love the Saint Saens concerto, it was not a piece that came naturally to me. Spending more time and energy allowed me to become more accustomed to it. By the time I was ready to perform, I had gained a deeper insight, and now it’s one of the pieces I can easily go back to.

BIMF: If you could play with any musician who would it be and why?

Lev: There are so many people I would love to work with, but if I had to choose, I’d probably say Gil Shaham. I’m a huge fan of his work, and I have heard wonderful things about him from friends who did get to work with him through various orchestras and other programs.

BIMF: How do you make a well-known piece of music your own?

Lev: Each person’s interpretation of any piece reflects his or her own personality. No two interpretations are exactly alike. The question I always ask myself is “what does this piece mean to me?” Transmitting a personal feeling to the audience is as important as transmitting the composer’s intent. As musicians, we are interpreters, not simply play-back devices.

BIMF: How would you explain your passion for chamber music to a non-musician?

Lev: Playing chamber music is an experience unlike any other. Each performer plays a part at once separate from and connected to the parts of the other performers. The best analogy I can think of is DNA: each part is a strand of the double helix – at once separate from and linked to the other. Apart, they are fragments – together, a beautiful whole.

BIMF: What was one highlight of the 2016 Festival for you?

Lev: Performing the Hummel Eb Piano Trio with new friends. It’s a lovely, quirky piece that none of us had heard before. We had a lot of fun preparing it and trying to sort out the often conflicting markings in the score.

BIMF: What’s next for you after the Festival?

Lev: Eastman School of Music and the University of Rochester, where I am pursuing a dual degree 5-year program and studying violin with Mikhail Kopelman. In the long run, I would love to perform solo and chamber for the next few decades before settling down and pursuing an academic career.

BIMF: What advice would you offer to an aspiring musician?

Lev: Don’t be afraid to fail. If you never try anything, you will never achieve anything. Nobody cares how many times you’ve failed before you succeeded!