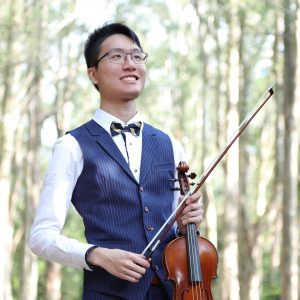 This past summer the Bowdoin International Music Festival welcomed 255 student participants from 27 countries and 30 states, including 17 remarkable Festival Fellows. Sixty-five percent of these participants received scholarship funds from the Festival. In celebration of an incredible 2016 season and in anticipation of an even better 2017 season, we’ve reached out to last year’s participants to reflect on their experience at the Festival and their lives as musicians.

BIMF: What are some of your earliest musical memories?

Ming Hang: I was first introduced to music at the age of three through participating in a weekly choral class in Hong Kong. During that time, my musical instinct was nurtured by exploring how to appreciate various genres of music, and learning to perform with musicality and expressions.

BIMF: At what age did you start playing your instrument?

Ming Hang: I started playing the violin at four and a half. At first I was not self-motivated. I didn’t set any goals for what I should accomplish during my early years, but I soon embraced the amazing sounds of the violin. Eventually, I began to produce a better quality of sound by vibrating my left hand and controlling the weight of my right hand when holding and griping the bow. I realized that the violin had the power to enrich people’s lives and being a violinist has been my dream ever since.

BIMF: Does the instrument you play on have a story?

Ming Hang: The violin that I currently play was purchased in Hong Kong in 2013. This violin bears a label saying it was made by French luthier Léon Bernardel in Paris in 1924. It was sold to the store by someone from Australia after being seldom played by their grandparent.

BIMF: What is the longest you’ve ever spent preparing a piece of music?

Ming Hang: Due to practical reasons, after graduating from high school in Hong Kong, I could only study one of my interests, multimedia design and technology, but not music. After a year of studies in the program, I was exhausted. I couldn’t forget how music helped maintain my emotional health. With this in mind, I quit the university. Fortunately, I was accepted to the Eastman School of Music in 2013.

Because I didn’t play for nearly a year before the Eastman audition, I became unfamiliar with some essential and crucial techniques. As a result, I spent almost my entire freshman year at Eastman learning the Mendelssohn Violin Concerto, drilling in basic techniques in order to clearly express the musical passages and phrases. Although it was not easy to go through the process, I treasure this period of time.

BIMF: How would you explain your passion for chamber music to a non-musician?

Ming Hang: Chamber music is a team of people working closely together. Each teammate shares the same goal. Each member contributes their own ideas to the ensemble. Although each player can accept or reject the proposed ideas, this opens everyone’s mind as to how a passage can be expressed in various ways. Ultimately, the ensemble will reach a consensus that adapts ideas from each member.

BIMF: What was one highlight of the 2016 Festival for you?

Ming Hang: My performance of the first movement of the Bartók Violin Concerto No. 2 at an Artists of Tomorrow concert on August 5. I started preparing the piece in Hong Kong after finishing my junior year at Eastman. This violin concerto was new to me because I had never played a polytonal piece. In just three weeks of instruction at the Festival, I was excited to have the opportunity to perform it. After performing the movement, I was thrilled that there was loud applause from the audience. It was an unforgettable experience.

BIMF: What’s next for you after the Festival?

Ming Hang: My goal is to entertain through music and multimedia. I aim to be an active performer, as a soloist, or as a violinist in an orchestra or a chamber music ensemble. Ultimately, I hope to be a violin teacher and to educate the next generation of music makers.