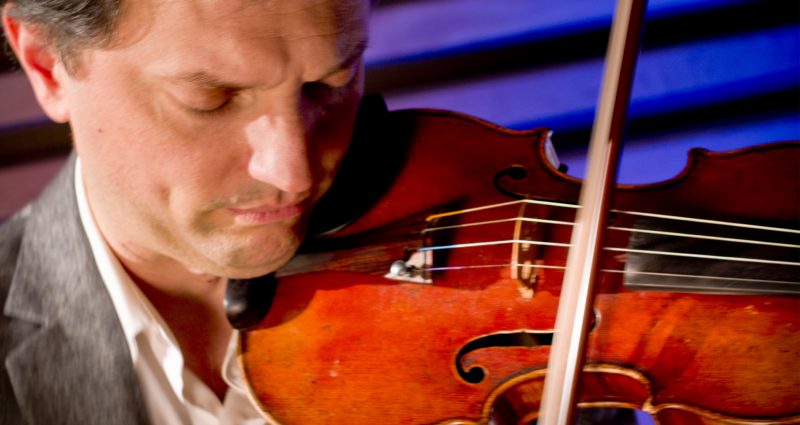 Enescu’s third Sonata for Violin and Piano bears the subtitle, “in the Romanian folk character”—a carefully chosen phrase. As the composer explained in 1928, “I don’t use the word ‘style’ because that implies something made or artificial, whereas ‘character’ suggests something given, existing from the beginning.”

Enescu had not always been attracted to folk music as a compositional resource, and it would be misleading to overemphasize the importance of nationality (or nationalism) for this versatile composer. Born in a small village in northern Romania, he showed stunning promise as a violinist and composer from an early age. He was sent to Vienna at age seven to enroll in conservatory; while there he brushed shoulders with Brahms. After graduating six years later, he moved on to Paris and entered conservatory once again, now studying composition with Massenet and Fauré, as well as piano and violin. His earlier work primarily reflects his absorption of these two incomparably rich musical worlds and pedagogical traditions—resulting in an eclectic œuvre which, with isolated exceptions, made scant reference to Romanian source materials. As late as 1924, Enescu expressed skepticism about the artistic potential of folk melodies for modern art music.

That is why Enescu’s notion of “character” was a conceptual breakthrough, allowing him, as he put it, to “write valuable compositions whose character will be similar to that of folk music, but which will be achieved through different, absolutely personal means.” For Enescu, this meant unleashing composition from tonal and metrical strictures through the incorporation of a variety of sonic, textural, and rhythmic effects—glissandi and quarter-tones, chordal clusters and melodic heterophony, and the displacement of temporal expectations through the constant manipulation of beats and accents. Achieving these myriad effects entailed an expansion of instrumental techniques made possible only by Enescu’s own virtuosic capabilities on violin and piano alike. To fix such freewheeling ideas onto the page was a challenge in itself—Enescu’s pupil, Yehudi Menuhin described the Sonata as the “greatest achievement in musical notation” of its time—but this feat of inscription remains to be reverse-engineered by performers, who must read between the staves to locate for themselves the “character” imagined by Enescu.

The stage for the “folkloric character” embodied in Enescu’s Sonata was set in part a generation earlier by composers like Dvořák, who became famous for mining Czech folk musical resources. It was Dvořák’s sets of Moravian Duets and Slavonic Dances that first caught the attention of the Berlin-based publisher Simrock (through the intermediary of Brahms), catapulting him to international stardom in 1878, at a time when German and Austrian palates were piqued by the perceived novelty—“orientalism,” even—of Eastern European dances and tunes. But success as an “exotic” act is double-edged, and as Dvořák’s fame grew over the 1880s, so did anti-Slavic fantasies of Germanic cultural “purity.” While Simrock were ever so eager to publish (and profit from) a second set of Slavonic Dances in 1886, Dvořák pursued in parallel an instrumental style that clung more closely to the Viennese (Brahmsian) mainstream.

It was Simrock who approached Dvořák in 1885 with the commission for a second piano quartet—an ensemble form which had become closely associated with Brahms after the success of his own piano quartets. (Dvořák’s only previous piano quartet had been completed in 1875.) It took Dvořák several years to fulfill the commission; in the interim, he was preoccupied with tours to England, the completion of his opera, The Jacobin, and also that of his glorious Piano Quintet, Op. 81. When he finally got around to the Piano Quartet in 1889, so easily did the melodies flow that the only limiting factor was the speed of his pen; as he put it to his friend Alois Göbl, “My head is full of it. If only one could write it immediately! But it’s no use, I have to go slowly, only what the hand can manage…” The profusion of melodies exudes a palpable joy and warmth, as conflict and drama cede readily to triumph and lyricism. The second movement contains one of the most beautiful themes Dvořák ever composed; the third movement, a shimmering scherzo with a waltz-like lilt, proves infectiously charming. Even as Dvořák cultivated a metropolitan style, the combination of melodic prolificity and rhythmic vigor, overlain with touches of gossamer elegance, distinguishes this piano quartet as unmistakably his.