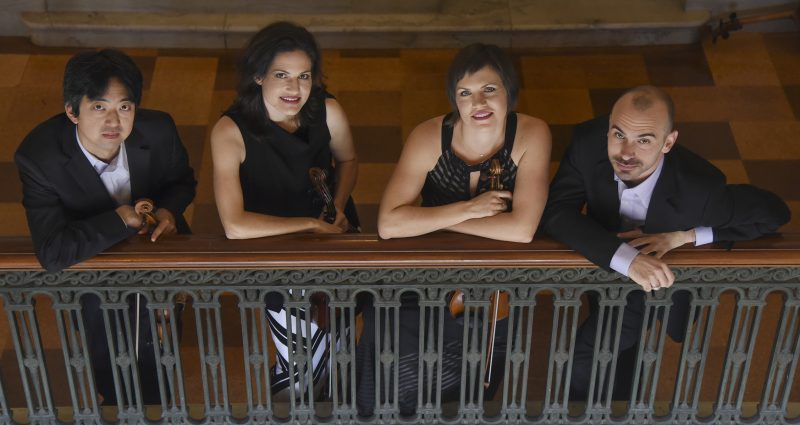 Inferring a deceased composer’s state of mind and seeking correspondences in their musical output, however tempting it may be, risks trafficking in superficial assumptions and misleading analyses. But Felix Mendelssohn’s final string quartet—his final major work—appears to present a robust case of compositional autobiography. In May 1847, Mendelssohn returned to Germany from touring in Great Britain to learn that his beloved sister and closest confidante, Fanny Hensel, had died two days earlier from a series of strokes. Felix reportedly screamed and collapsed to the ground in devastation: “I can’t even think about work, indeed about music, without feeling the greatest emptiness and desert in my head and in my heart,” he reflected.

Fanny, it is well established, was nothing less than Felix’s musical and intellectual peer. Patriarchal social expectations, imposed most brutally by their father and tamely seconded by her brother, compelled her to prioritize a family-oriented lifestyle while Felix was encouraged to pursue his professional trajectory in music. Fanny never ceased composing, however, and her bold resolution in 1846 to begin publishing her compositions despite her brother’s paternalistic reservations adds to the poignance of her premature death the following year.

In a desperate attempt to soothe his grief, Felix traveled to Interlaken, Switzerland for the summer, “in the hope that later I may feel like working, and enjoy it,” he wrote to their younger sister, Rebecka. While there, Felix succeeded in producing his string quartet—a work of torrential agitation relenting only briefly for oases of tenderness—although it’s tough to say whether he managed to “enjoy it.” Whatever solace he found was short-lived: when he traveled to Berlin that September, the sight of Fanny’s music room and grave unleashed a nervous breakdown that left him unable to fulfill the concert engagements that had brought him there. One month later, he experienced his own series of strokes. When he died in early November 1847, he was buried by his sister’s side.

Stephan Andrew Taylor has written the following note to accompany Chaconne/Labyrinth, a work composed and premiered in the midst of the past year’s coronavirus pandemic:

‘Chaconne’ is an old-fashioned word for a repeating chord progression, like the 12-bar blues. My chords are a little weirder, using just intonation to find notes that don’t exist on the piano keyboard. Here the wonderful Jupiter Quartet plays a chaconne, but at the same time they are lost in a labyrinth. The chords keep returning, only to point in new directions. This is how I’ve felt the past year: stuck in a loop, but at the same time lost in a maze, desperately seeking the way out. At the center of this maze, like the Minotaur of Greek myth, lies a depiction of the coronavirus that has so profoundly changed our world. After this encounter—marked by strange, percussive sounds—the quartet traces their way, like following Ariadne’s thread, back through the labyrinth.

Florence Price was born in Little Rock, Arkansas; her father was a dentist by day and a writer and inventor by passion, her mother, a concert pianist and soprano. She had their full support when, having sailed through school at the top of her class, she chose to pursue further study, and ultimately a career, in music. She studied at the New England Conservatory—one of the few institutions of higher musical education that would admit Black women—and then returned to Little Rock to work as an educator. When racist violence intensified there in the 1920s, Price and her family moved to Chicago, like many southern Black families—an influx that contributed to the city’s Black Renaissance in the 1930s and 40s. There Price gained increasing acclaim as a composer: she won the Rodman Wanamaker Music Contest in 1932, which led to national recognition, and when the Chicago Symphony premiered her Symphony in E minor the following year, she became the first African American woman to have a work performed by a major American orchestra. In addition to her reputation as a symphonist, Price was widely admired as a composer of art song. In particular, her arrangements of African American spirituals were championed by colleagues such as Marian Anderson and Leontyne Price.

Price’s life and career were extraordinary by any measure; however, musicologist Samantha Ege warns against portraying her as an “anomaly in the American musical landscape.” Rather, Price participated in important networks of Black women musicians who collaborated and supported each other in the face of racism and sexism, and whose legacies have since suffered, Ege notes, from naive assumptions that women (especially Black women) simply did not compose “back then.” Scholars and musicians are working to elevate these legacies today, including through the publication of Price’s extensive œuvre—much of it for the first time.

It’s not entirely certain when Price composed Five Folksongs in Counterpoint for string quartet. What is clear is that she was already experimenting with the contrapuntal treatment of African American melodies in her coursework at the New England Conservatory. Price provided the following remarks in relation to the songs:

No. 2 is based upon ‘Clementine,’ a ballad which became a favorite during the Reconciliation period. It was popular in San Francisco, California near the end of the 19th century and is often sung now-a-days by college and community groups.
No. 3, ‘Drink To Me Only With Thine Eyes,’ was sung by settlers on the Eastern coast of America before the days of the American Revolution… The words were written by Ben Johnson in 1616 and sung to a tune of unknown origin as early as 1770, included in this group is now regarded as a folk song, and is authoritatively included in published volumes of folk songs.
No. 4: Several folk songs.