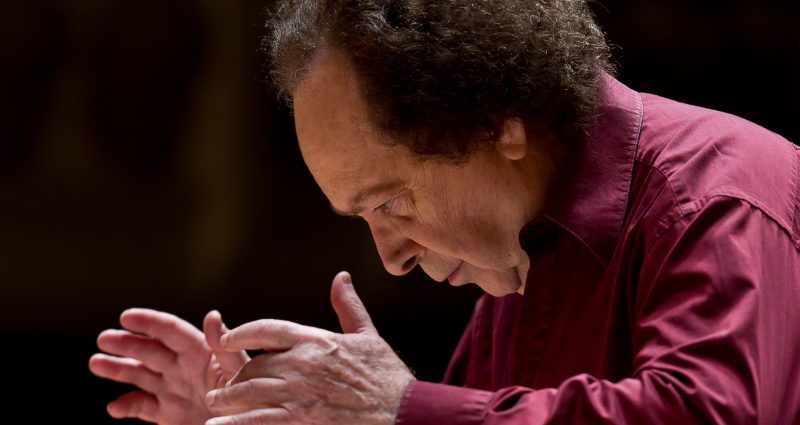 José Serebrier, who is today’s most frequently-recorded conductor, established himself as a significant composer as far back as the 1950s. Serebrier’s most recent work, Symphony No. 3 for string orchestra and soprano vocalise, has been released on Naxos along with a number of his other works for strings (see reviews).  The Symphony No. 3, “Symphonie Mystique”, was released on a new Naxos DVD in June 2008, performed live at Chester Cathedral in the UK by the National Youth Orchestra of Spain conducted by the composer. The 3rd Symphony, originally recorded on CD for Naxos by the Toulouse Chamber Orchestra, received three GRAMMY nominations, including a nomination for the “Best New Composition of 2004”.

Serebrier was born in Montevideo, Uruguay of Russian and Polish parents. At the age of nine he began to study the violin, and at age eleven made his conducting debut. While in high school he organized and conducted the first youth orchestra in Uruguay, which toured the country and gave more than one hundred concerts over four years. Upon graduating from the Municipal School of Music in Montevideo in violin, solfege, theory, and Latin American folklore at age fifteen, opportunities for conducting Uruguay’s only major orchestra were not forthcoming. That year, the annual composition contest by the National Orchestra, known as SODRE, was announced very late, only two weeks before the deadline. The young musician, thinking that if he won he might be permitted to conduct his work, entered the contest with a hastily written Legend of Faust overture. The 18-minute work was written in the last four days and nights, and the last page composed on a taxi while rushing to meet the deadline. Serebrier won the contest. But the composer being fifteen, his work was assigned to another guest conductor, Eleazar de Carvalho, at that time the most prominent Latin American conductor. Today, Serebrier conducts most major orchestras around the world, and has become the most recorded conductor of his generation, with well over two hundred and fifty titles. His published compositions, many of them written at an early age, also number over one hundred.

Early in his career, Serebrier was the recipient of many of music’s most coveted honors. In 1956 and1957 he received a United States State Department Fellowship to study composition at the Curtis Institute of Music with Bohuslav Martinu and Vittorio Giannini, and with Aaron Copland at Tanglewood. In 1956 he was awarded a Koussevitzky Foundation Award at Tanglewood and in the same year a BMI Young Composers Award for his First Symphony and Quartet for Saxophones. The State Department Fellowship was followed by two consecutive Guggenheim Fellowships in 1957 and 1958. At nineteen, he was the youngest ever to obtain these awards in any field. Serebrier has also been honored with two Dorati Fellowships at the University of Minnesota where he received his MA in 1960 (he graduated from the Curtis Institute in 1958), a Pan American Union Publication Award (for his Elegy for Strings), and the Ford Foundation American Conductors Project Award, won together with James Levine. Many other awards followed: a Rockefeller Foundation award to be Composer-in-Residence of the Cleveland Orchestra, at the invitation of George Szell during the season 1958/69 and again 1969/70; a Harvard Musical Association Commission Award (for Fantasia for string quartet); a National Endowment for the Arts Commission (for a ballet, Orpheus x Light for the Joffrey Ballet, based on the Concerto for Harp and Orchestra, Colores Magicos); a Grammy nomination for his recording of the Fourth Symphony by Charles Ives, with the London Philharmonic Orchestra; the U.K. Music Retailers Association award for best orchestral recording (for the Mendelssohn symphonies, with the Scottish Chamber Orchestra); the Deutsche Schallplatten Award for best orchestral recording (for the first of three CD’s of Shostakovich’s Film Suites, with the Belgian Radio Orchestra), Audiphile Magazine’s award for Best Orchestral Recording for his rendition of Scheherazade with the London Philharmonic, and many others.

Serebrier was 22 years old when Leopold Stokowski named him Associate Conductor of the newly formed American Symphony Orchestra in New York, a post he held for five years. Previously, Serebrier was the Minnesota Orchestra’s Apprentice Conductor, with Antal Dorati, for two seasons. Serebrier made his New York conducting debut with the American Symphony Orchestra at Carnegie Hall in 1965 with wide critical acclaim. Running like a theme through the reviews was an awareness of his intense, dynamic approach to music and his superb control of the orchestra.

Serebrier’s association with Stokowski goes back to 1957, when the two came together through a dramatic turn of events. It was in that year while conducting the Houston Symphony, that the maestro planned to premiere the difficult Symphony No. 4 by Ives. But the music still proved too difficult and complex for the orchestra, and Stokowski began to search for a new and interesting work that he could premiere instead, as a last minute replacement for the Ives Fourth. He found and chose Serebrier’s Symphony No. 1, written by the then 17-year-old student at the Curtis Institute of Music, who had just arrived in the United States. The occasion of the concert was their first meeting. Eight years later the “unplayable” Ives Fourth Symphony finally had its premiere with Stokowski conducting the American Symphony at Carnegie Hall. Standing on another podium next to Stokowski, one of the three conductors necessary for the rhythmic complexities of the work, was José Serebrier. A few years later Serebrier would perform and record the symphony with the London Philharmonic Orchestra on his own, without the assistance of other conductors. His RCA recording is considered a landmark. High Fidelity called it “one of the best recordings ever made.” It won a Grammy nomination and it received numerous awards around the world.

Leopold Stokowski conducted the first New York performance of Serebrier’s Elegy for Strings in 1962 at Carnegie Hall, and in 1963 Stokowski opened the American Symphony Orchestra season at Carnegie Hall with the premiere of the composer’s Poema Elegiaco (originally entitled “Funeral March”, the second movement of Partita)

The Louisville Orchestra recorded Serebrier’s Partita. In his review, Alfred Frankenstein writing for High Fidelity Magazine, hailed Serebrier as “the logical successor to the crown of Villa-Lobos, and the South American to watch.”

For the 1968-69 and 69-70 seasons, George Szell named José Serebrier Composer-in-Residence of the Cleveland Orchestra under a special grant from the Rockefeller Foundation. While in that position, he wrote a harp concerto entitled Colores Magicos for the Inter American Music Festival in Washington. It combined light and sound and it tempted Irving Lowens to write: “Despite the use of such fashionable devices as tone-rows (the composer says that the work is based on a row of 10 notes, and if he wants it that way, so be it, even though I couldn’t perceive the serial organization with my ears), tone-clusters, tone-clouds . . . Serebrier, a first-rate conductor, uses orchestral colors in much the same way as a child uses finger-paints. He lays about him with a fine fury, and achieves something of the stagey horror of a tale by Edgar Allan Poe. Of the 15 new works I heard during the course of the festival, I’d rank Colores Magicos among the best… its advanced techniques don’t get on its way. Doubtless it will be heard—and seen—again; it deserves to be.”

Shortly after, Serebrier wrote another multi-media work, Nueve, a concerto for double bass and orchestra, commissioned for the double bass virtuoso Gary Karr. Serebrier and Karr have performed this concerto all over the world. Serebrier has also written concertos for accordion and orchestra (commissioned by the American Accordionists Association), trombone, violin and others. He has composed several works for percussion ensembles. The Symphony for Percussion was recorded by John Elliott Gardiner.

Serebrier’s Violin Concerto Winter was premiered at Lincoln Center in New York in 1995 to wide critical acclaim, and has since been performed in London (Philharmonia Orchestra), Madrid (National Symphony), and many other cities around the world. Other recent published works include Dorothy & Carmine! for flute and chamber orchestra, At Dusk, in Shadows for solo flute; Night Cry for brass ensemble, George & Muriel for double bass and chorus, Tango in Blue (Tango en Azul) in various versions for orchestra, string orchestra, string quartet, violin and piano, etc., Casi un Tango (Almost a Tango) for English horn and strings (all published by Peer Music); Carmen Symphony (winner of the 2004 Latin GRAMMY) after Bizet, published by Kalmus in its orchestral version, and by Hal Lenard in its version for concert band; orchestrations of Gershwin’s Three Preludes and Lullaby, commissioned by the Gershwin family for Gershwin’s 100th anniversary (published by Warner Music), orchestrations of 14 Songs by Grieg (published by Peters Edition), and the Symphonic Synthesis of the opera The Makropulos Case, published by Universal Edition Vienna.

—Based on articles by Oliver Daniel
© By Broadcast Music Inc.