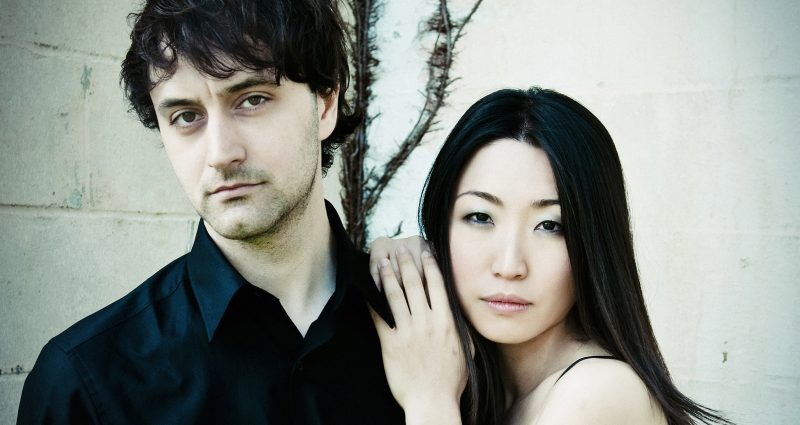 Hungarian composer György Kurtág, born in 1926, emerged relatively late in his life as a significant voice in contemporary music. He spent most of his adult career as professor of piano at the Franz Liszt Academy in Budapest (during much of which time Hungary was under its communist regime), only composing occasionally, with a perfectionist’s caution and reticence. Ultimately, it has been in small, often fleeting forms that Kurtág has felt most expressive: his collection of miniature two- and four-hand piano works, Játékok (“Games”), begun in 1973 and to which he has been adding to this day, exemplify what he has described as his “courage to work with even fewer notes.”

Kurtág’s Bach transcriptions, too, exemplify the composer’s fascination with modest perfection. Like the Játékok pieces, Kurtág has been producing these arrangements periodically over several decades; and also like the Játékok, he took to performing them in concerts with his wife, pianist Márta Kurtág, whom he married in 1947 and who died in 2019. These performances, with their frequent crossing of the hands, and often using an upright piano with the soft pedal depressed, recast Bach’s works in an atmosphere of poignant intimacy.

The selection here presents two sacred choral extracts: Gottes Zeit ist die allerbeste Zeit (“God’s time is the very best time”), a chorus from an early funeral cantata; and O Lamm Gottes, unschuldig (“Oh Lamb of God, Innocent”), a chorale prelude. Placed between these is an arrangement of an organ sonata written by Bach for his son, Wilhelm Friedemann, and other students.

“I delved into different relationships and possibilities between them; material passed back and forth, dialogues, interlocking phrases, shifts of figure and ground. In some pieces, I emphasized the individuality of each piano, writing for one player as the ‘singer,’ the other as the ‘accompaniment;’ in other pieces I wanted the two pianos to make one large sound … Directness, purity, asymmetry, and above all transparency have always been important to me. The surface of the music is seemingly simple but the intricacy of detail and the combination of restraint and expressivity challenge the performer. Every gesture is exposed and clear.”

Just as today’s program began with Bach through the prism of Kurtág, we end this first half with Haydn as reimagined by Brahms—or so he thought. Brahms, among the most historically inclined of nineteenth-century composers, had been pursuing the score of a Feldpartita, an open-air suite for military wind band, which had been attributed to Haydn. He selected the second movement, titled Chorale St. Antoni as the basis for an orchestral variation set, itself a rarity, as variation sets had lent themselves more traditionally to chamber or solo repertoire. Brahms was no doubt attracted to this melody’s unusual construction in genteel five-bar phrases, and brought the project along with him on a holiday retreat to Tutzing, overlooking the Bavarian Lake Starnberg. After completing the orchestral version, he immediately produced a virtuosic arrangement for two pianos; the two versions share an opus number with a distinguishing letter.

Ironically, Brahms’ historicist predilections appear to have led him astray in this instance, as scholars have contended that the Feldpartita in question could not possibly have been written by Haydn. More likely, it is cynically argued, a publisher appended Haydn’s name to the suite, whose true composer was either little-known or entirely anonymous—an attested sales strategy. No matter. In the end, the Variations are Brahms’s work through and through: massive piano textures span the range of the keyboards, culminating in a grandiose passacaglia that inflates the theme into a repeating five-bar progression and builds toward a resounding conclusion that will stay with you through the intermission.

This piece was originally meant as one of my Twelve études in all the minor keys, so it was first conceived as a solo piano work. I didn’t get too far with it though; I was so dissatisfied with its pianistic aspects that I set it aside. But when Ran Dank and Soyeon Kate Lee asked me for a four-hand work, I thought it would be interesting to revisit the tango idea and to see whether it would work better as a piano duet. It can also successfully be performed on two pianos.

Those who have felt the dominating force in the tango realm in recent years, that is Astor Piazzolla, will find something very different here. Though the harmony still has plenty of spice, this piece is a lot closer in style to the beloved, more traditional tangos of Carlos Gardel.

The massive textures of Brahms’ Haydn Variations are rivaled by the opening movement of Rachmaninoff’s Suite No. 2, a brisk march requiring both pianists to sustain long passages in chordal octaves. This major-key opening brims with confidence and optimism—qualities that Rachmaninoff scarcely possessed when composing the work. The composer had spent three years in profound depression following the disastrous failure of his Symphony No. 1 in 1897. He eventually found solace in the methods of hypnotherapist Nikolai Dahl, who lulled Rachmaninoff into a daze while intoning the words, “You will begin to write your concerto. You will work with great ease. The concerto will be of excellent quality…” No one was more surprised than Rachmaninoff himself when the Dahl’s incantation came good: in the summer of 1900, the Piano Concerto No. 2 seemed to flow out from him—as did the set of preludes, Op. 23, and his Suite No. 2. The muscular march is followed by a far more nimble Waltz in which both pianists synchronize dizzying passagework. Then, a warm Romance, which blends textural elements of the first two movements—an ascending theme filled out with rich harmonies, and adorned with a filigree that echoes the Waltz. It is only in the Finale, a Tarantella with a main theme Rachmaninoff credits to an Italian folk song anthology, that we arrive at the titular key of C minor—a victorious arrival that mirrors Rachmaninoff’s own triumph over his critics.