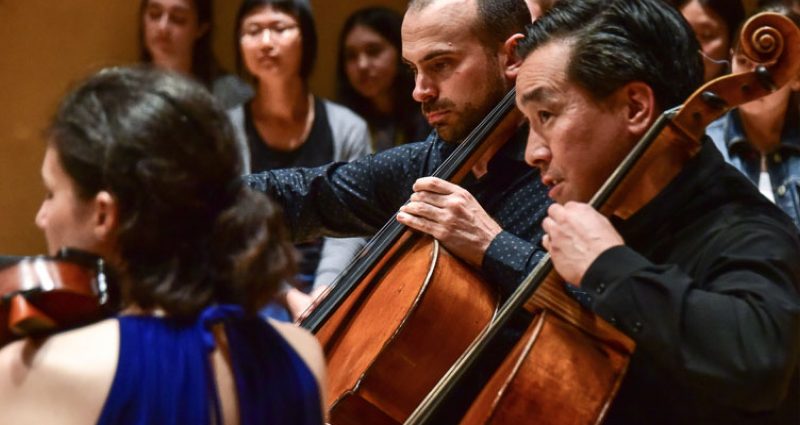 Viennese composer Alexander Zemlinsky was at the center of many crossroads. For one, his family’s cultural diversity—his mother, born in Sarajevo to a Saphardi Jewish father and a Bosniak Muslim mother, and his father, the son of devout Catholic emigrés from Slovakia—recalls the metropolitan melting pot that was fin-de-siècle Vienna. (Zemlinsky’s father converted to Judaism the year before Alexander was born, and raised his son in a Jewish household.) Moreover, Zemlinsky belonged to a transitional generation of Viennese musicians: during his formative years, he revered and emulated Brahms; as he matured, he nurtured the generation of composers who developed twelve-tone composition. Indeed, Zemlinsky is recognized as Arnold Schoenberg’s only teacher.

The String Quintet is a relatively early work. We are left with only two movements, intended to be the first movement and the Finale; while Zemlinsky planned two internal movements, these were later abandoned as he focused on his better-known string quartet. Fortunately, the heft and architecture of the two completed movements allows the quintet to stand robustly on its own. Finished or not, the work is directly implicated in Zemlinsky’s career trajectory, thanks to an encounter with Brahms himself. Zemlinsky’s recollections are worth citing at length—not only for what they have to say about the Quintet, but for the picture they paint of a kindly (if surly) Brahms, keen to invest in the younger generation:

“When I think of the time during which I had the fortune to know Brahms personally—it was during the last two years of his life—I can recall immediately how his music affected me and my colleagues in composition, including Schoenberg. I was still a pupil at the Vienna Conservatory and knew most of Brahms’ works thoroughly. I was obsessed by this music. My goal at the time was nothing less than the appropriation and mastery of this wonderful, singular compositional technique. I was introduced to Brahms at the occasion of a performance of a symphony of mine, which I had composed as a student… Soon thereafter, the Hellmesberger Quartet performed my String Quintet, which Brahms also heard. He asked for the score and then invited me to call on him; he did so with a brief and somewhat ironic remark, casually tossed off: ‘Of course, come if it might interest you to talk to me about it.’ This cost me a hard struggle: the idea that Brahms would speak to me about my attempts at composition elevated my already powerful respect to the level of anxiety. To talk with Brahms was no easy matter. The question-and-answer was short, gruff, seemingly cold, and often very ironic.

“He went through my quintet at the piano with me. At first he would offer corrections gently, looking carefully at this or that spot. He never really offered praise, but would grow more animated, and ever more passionate… Brahms’ ruthless criticism had put me in an extremely despondent mood, but he soon cheered me up again. He asked about my financial situation and offered me a monthly stipend so that I could work fewer hours and devote myself more to composition. Finally he recommended me to his publisher Simrock, who also agreed to issue my first compositions…”

Schubert’s string quintet forms part of an effusion of glorious music composed in the year or so before he died—an outpouring which also included Winterreise and Schwanengesang, the Fantasy for violin and piano, the second piano trio, his Symphony No. 9, and the three final piano sonatas. Given the exalted reception this work has received since, it might come as a shock that Schubert’s publisher, Probst, took no interest in the quintet in 1828. Instead, Probst’s counter-request upon receiving the work—that Schubert send him more Lieder—serves as a reminder of the commercial realities underpinning composers’ lives for much of the nineteenth century, as well as of Schubert’s pigeonholed reputation as a songwriter during his lifetime. The quintet lay unperformed until 1850 and unpublished until 1853, decades after the composer’s death.

In contrast to the quintets of Mozart and Beethoven, Schubert supplemented the string quartet formation by adding a second cello in place of a second viola. The result is a symmetrical ensemble, divisible into multiple fluid alliances affording rich textural interplay. Schubert exploits this potential in the opening bars: a C major chord, swelling into and out of a neighboring diminished harmony, is brightened by its presentation in the upper quartet; this statement is then reflected in a minor shade, darkened this time by the lower tessitura of the bottom four strings. In the second subject, Schubert spotlights the twinned cellos in a lyrical duet that winds to the dominant key area by way of the unusual intermediary of E-flat major. Yet another precious texture opens the second movement: a protracted theme, harmonized and sustained in the three close inner parts, is ornamented by a crystalline dialogue between the second cello’s pizzicato and the dotted figure in the first violin, marked ‘espressivo’. The serenity in E major cedes, via an abrupt trill, to a tumultuous middle section in F minor, a dark shift up a semitone that musicologist Scott Burnham hears as ‘thresholds between, worlds apart’. The third and fourth movements invoke the exuberance of popular and folk styles—careful pacing and mounting tension yield to the acceleration of the final coda.